The women’s basketball team lost an overtime heartbreaker to Lake Forest. They were in it the whole game, but lost it in overtime.
Andy York 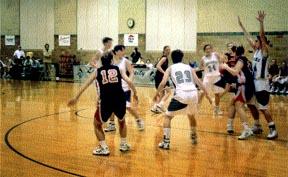 The women’s basketball team lost an overtime heartbreaker to Lake Forest. They were in it the whole game, but lost it in overtime.

The Lawrence University women’s basketball team lost a heartbreaker, 70-64 in overtime, to Lake Forest College in the Midwest Conference tournament semi-finals last Friday night. With 1:52 to go in the game, Lawrence took a time out down 53-50. Lake Forest scored right away.

With 13 seconds remaining, Lawrence called a timeout following a steal by senior guard Beth Pollnow. Schmidt took the inbound pass, but was double-teamed. She tried driving to the basket, but found no hole. She put up an off balance shot that rolled off the rim as time expired.

In overtime, Lawrence was out hustled and out matched. The Foresters began the overtime period with a 5-0 run, and the Vikings never caught up. Senior Dara Rakun, in her last game as a Viking, fouled out with 45 seconds remaining, and was given a standing ovation by the Lawrence contingent. Pollnow hit two three pointers as time as ran down, but it was to no avail.

The game had begun slowly as Lawrence set up in a 2-3 defense and continued to play that way for most of the game. Lake Forest, however, found ways to break down the defense, and drew many fouls. Foul trouble haunted the Vikings in the first half, as senior guard Rakun picked up her second foul only two minutes into the game. She ended up sitting down for a good portion of the first half.

The referees were letting both teams bang down low, but called a high number of fouls behind the three-point arc, mostly on LU players. As a result, Lawrence found many of its star players in foul trouble early. Porrata had two fouls, as did freshman guard Schmidt.

With many bench players in the game because of the foul trouble, Lake Forest was having an easy time breaking through LU’s zone. Vikings subs made costly turnovers as the half came to a close, allowing the Foresters to gain even more momentum as they went to the locker room.

The teams went to the locker room with Lake Forest ahead 34-27. Lake forest finished eighth in the conference in free throw shooting (64 percent) and finished the first half 16-16 from the line. This would prove to be the difference in the game’s outcome.

Coach Amy Proctor questionably ran the last play of regulation through the shortest player on the floor, instead of a stronger player like Pollnow or Poratta

Defending her choice, Proctor said, “I have no second thoughts about that play, no regrets at all. Jessi (Schmidt) made her shots earlier and I thought she could do it for us again. If we were down by one I might have run a different play, but I knew we had overtime to fall back on” Proctor said.

Schmidt agreed, “I knew we had overtime, and I just tried to get fouled on that last shot, but I didn’t get the call.”

The high scorer for LU was Porrata. She finished with nineteen points and ten rebounds to give her a double-double. In her last game for LU, Pollnow finished with twelve points and one steal. Free throws also made a huge difference in the game. Lawrence shot percent while Lake Forest shot percent.

“Free-throws were key, they came hard inside, and we didn’t, we just couldn’t pull it out,” said Rakun.

In the other semi-final, Carroll defeated Ripon 62-57, which set up a rematch of last year’s championship game between Lake Forest and Carroll. Carroll came out early and held a 28-24 lead at the half. However, MWC coach of the year, Jackie Slatts of Lake Forest, got her girls fired up. They came out with a rush, and blew away Carroll in front of their home fans. Lake Forest outscored Carroll 48-28 in the second half and coasted to a 72-56 win. This was Lake Forest’s third straight MWC championship, and they received the automatic bid to the NCAA tournament.