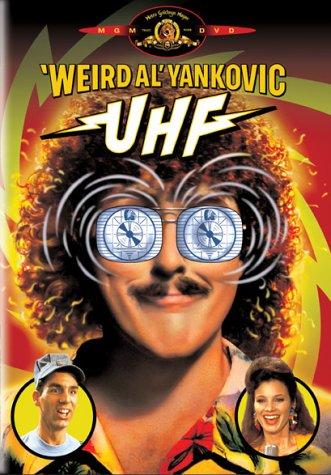 When browsing the scores of streaming titles available on Netflix, a viewer is presented with a myriad of options: there are Academy Award winners like Traffic, renowned television series like Breaking Badand Battlestar Galactica, touching and revealing documentaries like Being Elmo, recent summer blockbusters like Thor, and then there’s “UHF”, possibly one of the worst movies I have ever seen.

“UHF” stars comedy singer “Weird Al” Yankovic as George, a man whose overactive imagination leaves him unable to hold down a steady job. Through a weird turn of events involving his uncle’s compulsive gambling, he becomes the new manager of the local UHF station, U62.

Though the movie’s most basic plot structure serves as a parody of movies like Broadcast News and Network, this only takes up about twenty minutes of the film, with the other eighty taken up by brief commercial parodies, a played-out “save the station” telethon, and parodies of Indiana Jones and Rambo which bookend the film and overstay their welcome by at least five minutes each.

Because of this enormous variation in the film’s content, good pacing is rendered completely impossible. Storylines leap around, leaving enormous plot holes in their wake and even the inevitable happy ending fails to wrap up several storylines which probably never should have existed in the first place.

Equally problematic are the characters in “UHF”, which are so clichÃ©d and cookie-cutter that every frame of their existence can be accurately predicted from the first moment that they appear on screen: a janitor who is inexplicably good at hosting children’s television programming, but madly in love with his mops, an offensive Asian stereotype (of which country I’m not sure; both the accent and cultural references seemed to be constantly jumping across the continent) who teaches martial arts, and -perhaps most inexplicably – George’s plucky sidekick, who speaks maybe three lines in the entire movie, and yet appears in the background of every single shot that George is in. George and his best friend are like Penn and Teller, except neither of them are actually funny.

Perhaps because of these reasons, the jokes in “UHF” – a comedy at its core – never really take hold. Even the funniest moments of the movie, contrived situations which result in bad puns on classic lines (think “We don’t need no stinking badgers!”) become awkward and dull.

Parody is a difficult form of comedy to pull off; it requires intimate knowledge of the subject matter and a willingness to overlook the obvious joke for an unexpected and interesting one. Typically, I would assume that this would be a question of a lack of talent from the writer, but those familiar with “Weird Al”‘s unorthodox musical parodies can attest that he is actually a very talented individual. More than anything, this seems to be a failure of transition to a new medium.

When the film was first released, its studio, Orion Pictures, expected it to be the success that would pull it out of the red. Looking back now, it’s no wonder that Orion closed for business.