Anderson’s The Royal Tenenbaums is a royal treat 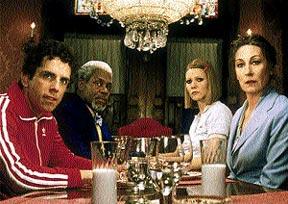 “Family isn’t a word, it’s a sentence.” This rather dull catchphrase implies a heartwarming and predictable storyline for a movie that is, in reality, anything but. The Royal Tenenbaums is the satirical tale of an eccentric, dysfunctional family with swarthy undertones.Clan patriarch Royal Tenenbaum (Gene Hackman) and his wife Etheline (Anjelica Huston) start a family in a rambling, wood-paneled home against the backdrop of a forgotten Manhattan neighborhood, then split. Royal departs for The Lindbergh Palace Hotel, where he lives for the next twenty years, leaving Etheline to raise their three children, who become, each in their own right, child geniuses.

Their eldest child Chas (Ben Stiller) is a curly-haired real estate and stock market whiz with a head for international finance, who negotiated the purchasing of his parents’ summer home while still in his teens. Margot (Gwyneth Paltrow), the middle child and adopted (a fact her father never allowed her to forget) Tenenbaum, is a playwright with a Braverman Grant of $50,000 dollars and had an inferiority complex by the ninth grade. Richie (Luke Wilson) is a tennis phenom who goes on to win the U.S. nationals for three years in a row.

Fast-forward twenty years. The once-famous Tenenbaum child prodigies are long forgotten and have subsequently scattered to the wind. Chas, after the untimely death of his wife, becomes an ultra-paranoid safety freak and is training his boys, Ari and Uzi, to be the same way. Margot, burnt out, disillusioned, and married to neurologist Raleigh St. Clair (Bill Murray), twenty years her senior, does little else but smoke and soak in the tub. Richie, after the greatest fizzle-out in sports history, spends his time sailing the world on a luxury liner far away from home, corresponding with Eli Cash (Owen Wilson), who was a permanent fixture of the Tenenbaum household as a child, and pining for his lost love. Etheline, now an archaeologist, is about to get engaged to Henry (Danny Glover), her accountant and long-time friend of the family.

Royal, not about to let his wife go without a fight, gets evicted from his hotel then feigns a terminal illness in order to weasel his way back into the family he abandoned. By this time, all the Tenenbaum children, through one way or another, have found their way home, and the family finds itself under one roof once again, thus setting the stage for a series of interactions, flashbacks, and loosely-linked events that dredge up the past as Royal seeks to make up, in his own way, for twenty years of lost time.

With a cynical slant and plenty of tongue-in-cheek humor, The Royal Tenenbaums is an intellectual comedy with a killer soundtrack and some pretty fantastic cinematography. It also features Hackman at his best as a grouchy old man, over-huffed with self-import and facing the reality of a family whose flaws he had a large hand in creating. Huston, as his opposite, is the believably calm and stable center of a family caught in constant undertow. Stiller’s character was a detachment from the spastic type of acting he’s accustomed to performing. Paltrow pulls off the emotionally blunted, black-eyelined Margot with apparent ease, and Luke Wilson, though hidden by a shag of 70s hair for the first half of the movie, emerges toward the end as a strong character in a cast full of them.

Narrated by an unseen Alec Baldwin, The Royal Tenenbaums unfolds according to the chapters of a book by the same name. Sporting an all-star cast of disillusioned, under-played, and overly complex characters, a string of seemingly rocky and unrelated events, along with two funerals and an attempted suicide, director Wes Anderson wrestles with some pretty heavy issues, and in his signature way, makes them work.

The Royal Tenenbaums doesn’t live up to its catchphrase, thank goodness. It’s a movie that far exceeds it. A refreshingly unexpected deviant from the “everything works out in the end” caste of family film, The Royal Tenenbaums is a wonderfully dark and satirical family portrait with an artsy, intellectual edge.