Not a singer, not yet an actress 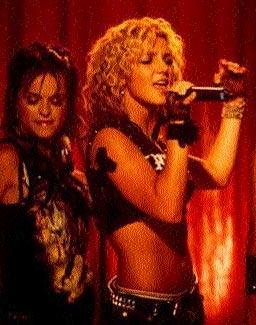 It is unfortunate that Crossroads wasn’t released before Feb. so that it might be included in the Academy Award nominations for this year. Instead, audiences will have to wait until next winter to discover that while Britney prancing about in her underwear (which she does twice, as well as having a scene in a towel) is enough to make her movie number two in the box offices, it is not enough to convince anyone that she has any talent.In the movie, Britney plays Lucy, valedictorian of her class who never had any fun in high school (and never lost her virginity!). Her father (Dan Aykroyd) is overbearing, always wanting her to follow the direction he has planned for her. Poor Lucy. The idea of presenting Britney as a smart character is one of the silliest. If you do opt to see this ridiculous film, you can look forward to the scene where she whips out her calculator and does some advanced addition and subtraction in a waffle house.

The premise of the film is that Lucy and her two childhood friends Kit and Mimi (Zoe Saldana and Taryn Manning) have grown apart. But, on the day of their graduation, they meet to uncover a box they had buried when they were little, in which they had each placed their greatest wish. Kid sister Jamie Lynn Spears plays little Lucy in the dramatic burying of the box. Now, years later, the three all have reason to head west in interest of accomplishing the goal they had hoped for so long ago…and so they decide to take a road trip with an older fella named Ben (Anson Mount).

The situation is ridiculous from the start. There is Lucy, the smart and dorky (but tan and well-dressed) girl. Then there’s Mimi, who hails from the trailer court and is pregnant (though it is because of a rape, naturally, and not from her being irresponsible). The hot Kit is the homecoming queen whose fiance just may be that same jerk who raped poor Mimi. And Ben, about whom the high school had been gossiping because of his recent release from jail, is really a good kid who was doing time not for murdering a man, for saving his step-sister’s life.

So, everything predictable happens: the three become friends again, Lucy and Ben hook up, and they all learn a little something about themselves along the way. Girls are taught that drinking alcohol leads to rape, and that having friends is the most important thing. And, of course, there is a lot of singing along with the radio on the way, they audition their band in Hollywood at the end, and there is also a pit stop at a karaoke club so that there is an excuse for Britney to don a midriff-revealing, cleavage peaking ensemble and to sing and dance.

Throughout, there is the feeling that Britney is trying to present herself as innocent and sweet. Yet, and maybe this is a deep metaphor about the real Britney, there is a conflict between the nave and the rebellious. For instance, a large part of the plot revolves around her finally losing that virginity. She rebels against her dad, who she calls “Pop,” and she even partakes in some underage drinking shortly after being surprised when a man tries to harass her in the bar she has just shaken her pelvis at throughout her rendition of “I Love Rock and Roll.”

The music is usual Britney, with one song even being written by her loving boyfriend, Justin Timberlake. There wasn’t much advertisement about that detail, maybe because it wasn’t a very good song, but I’m sure he wrote it from the bottom of his Britney-loving heart. This is a nice little bit, considering that movie-Ben puts movie-Lucy’s riveting poem, “Not a Girl, Not Yet a Woman,” to music.

Promotional posters and trailers for this movie claimed it as “Britney’s first movie.” If she manages to make a second, it will be impressive to see her fit any more teen movie clichs into it.

Admittedly, Britney’s movie is less horrible than one may have hoped. Oddly, that almost makes it worse. She didn’t even have the heart to do such a terrible job that everyone could laugh at it together. Instead the movie is a typical teen adventure, just good enough so that junior high children will defend it, and not quite bad enough for everyone to flock to it so their laughter can teach those innocents otherwise.