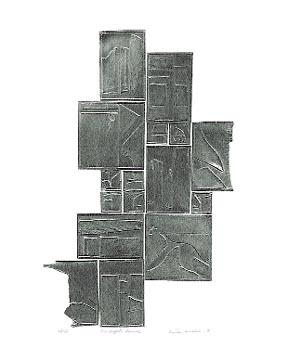 Last fall, Wriston Art Galleries was granted $5,000, specifically earmarked for the acquisition of a new piece of artwork, by the Katherine T. Bohen Family Foundation. Sarah Bohen (’01), an art major and regular intern at Wriston, made it possible for her family’s foundation to make this one-time grant to the art galleries. Wriston does not normally have a budget or independent funds for the acquisition of new art, and depends on donations to augment the collection. So, says Frank Lewis, Wriston’s curator, although gifts of art are always greatly appreciated, the novelty of shopping to fill in a specific gap in the collection was a joy for the galleries.The perfect find in Wriston’s shopping expedition was “The Night Sound,” a lead relief print by Louise Nevelson. “The Night Sound” is an expedition in itself, composed of Louise Nevelson’s signature “found art” style. In the 1950s, Nevelson was known to scavenge the streets of New York City for materials that most would deem “trash.” She transformed her trash into treasure in her constructions of abstract three-dimensional art. Nevelson’s “found art” constructions demonstrate a kind of accidental quality, says Frank Lewis. When Nevelson juxtaposed the curious, discarded objects of urban life, she could create the illusion of a city skyline and highlight the elements of the city’s action and mystery. “I think all the great innovations are built on rejections,” said Louise Nevelson.

Bits and pieces of New York from Nevelson’s studio are apparent in Wriston’s newest acquisition. The Night Sound” is a lead relief, meaning that Nevelson arranged her materials in a montage of rectangles and squares, which serves as a template for the prints. She then overlaid lead plates on her work and applied pressure so the texture of the materials, in this case pieces of wood from crates, was translated into the lead. “The Night Sound” is a close approximation to Nevelson’s other larger works because of its three dimensionality and its monochromatic appearance; “The Night Sound” has only shades of gray and black. This piece is Wriston’s first representative from the lead relief medium, so art classes at Wriston will now be able to expand into the lead relief medium as well.

The galleries’ choice to add “The Night Sound” to Wriston’s collection comes from the piece’s intriguing “found art” aspect, but also from a need to augment Wriston’s representation from female artists, says Frank Lewis. Louise Nevelson, who was born in Russia in 1900 and died in New York City in 1988, gained most of her acclaim and notoriety in the 1950s. She worked to counter not only traditional views of art, but practiced art in a field that was largely dominated by men. She drew her notoriety not only from her eccentric street-side expeditions, but also from her pieces’ provocative titles like “The Night Sound,” “Total Obscurity,” and “Sky Cathedral.”

Nevelson was known to wear only black and always heavy, dramatic eye makeup. Just as her art leaves a gray-black sheen of curiosity in the eye of the beholder, Louise Nevelson left a dark, provocative glow in New York art circles. “The Night Sound” will be on display at the Wriston Art Galleries sometime during the 2002-2003 school year.