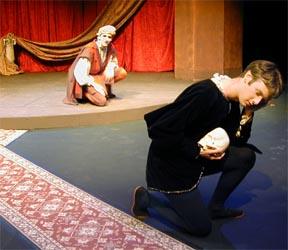 Tonight, the winter term play, Gilbert Without Sullivan, promises an hour in Cloak Theater that will provide an evening of laughter. Gilbert Without Sullivan is comprised of two one-act plays by W.S. Gilbert, one half of the famous Gilbert & Sullivan duo. Gilbert’s short, comic one-acts, Rosencrantz and Guildenstern and The Realm of Joy, and will complement Lawrence Opera’s upcoming production of Gilbert & Sullivan’s Mikado, says director Mark Dintenfass.Rosencrantz and Guildenstern, premiered in 1891, is a spoof of Hamlet and an irresistible opportunity to showcase Gilbert’s games with language. For example, one scene based on a Hamlet soliloquy exploits a clever use of words to turn Shakespeare’s speech inside out.

Today, most of Gilbert’s solo efforts are relatively obscure in the shadow of his widely known collaborations with composer Sullivan. However, Gilbert’s works are interesting and important in their own right, says Dintenfass. His deliberate challenge of status quo and fresh humor set Gilbert above other playwrights and notably influenced the writing careers of Oscar Wilde and George Bernard Shaw.

Gilbert Without Sullivan opened Feb. 21, and continues Friday and Saturday at 7:35 p.m. and Sunday at 2:35 p.m. All performances are in Cloak Theater for a ticket price of $10 for adults, $5 for students with I.D., and Lawrence faculty/students/staff are free.