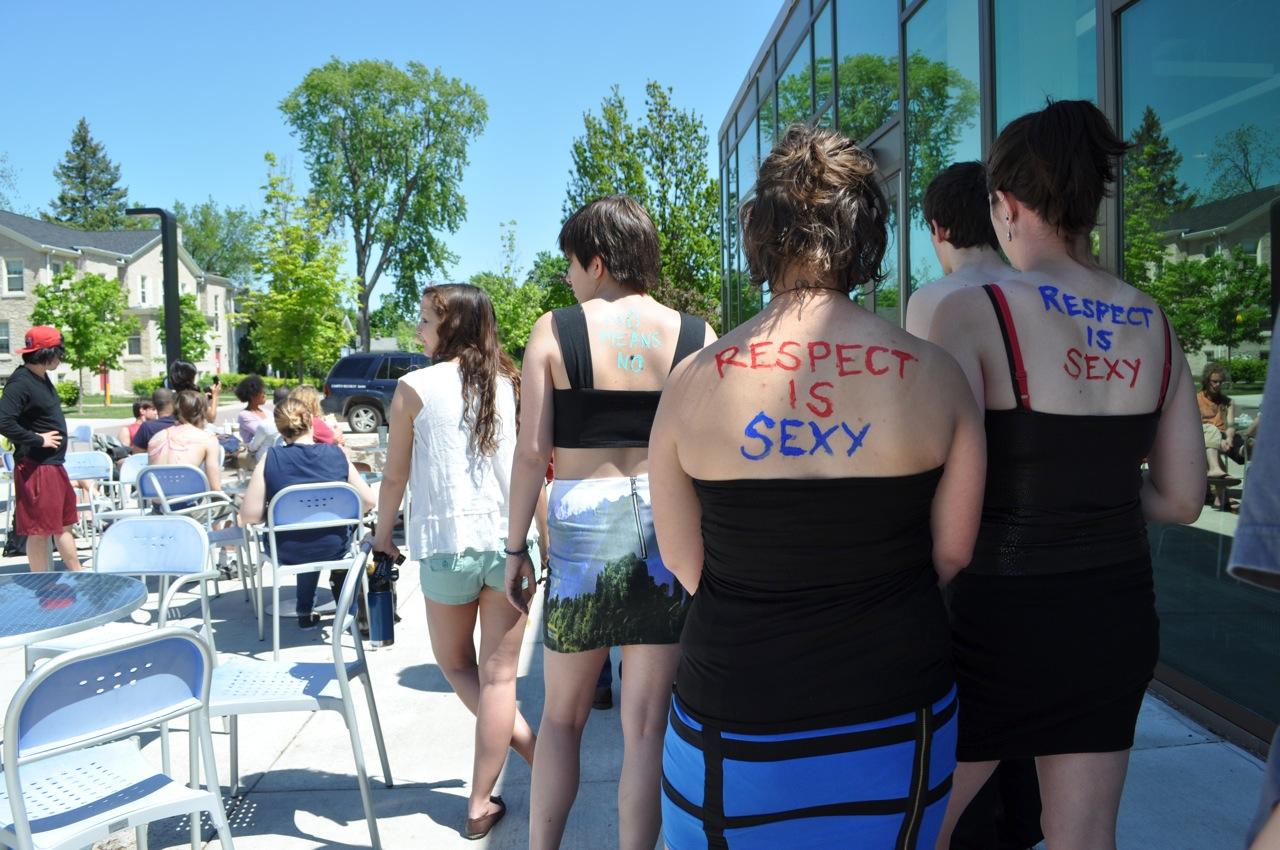 A relatively new movement, SlutWalk began April 2011 in Toronto after a police officer suggested that if women wanted to remain safe, they should not dress like “sluts.” Since then, SlutWalks have been hosted all over the world, including across Europe, Asia, Australia and most major U.S. cities.

This weekend, the first SlutWalk to be held in the Fox Cities took place in downtown Appleton. Around 50 walkers marched from Lawrence University to Harbor House, an organization dedicated to helping domestically-abused women and children.

The participants, who gained a few extra walkers along the way, carried colorful signs and danced to the beat of the Sambistas’ drums.

Senior Tamanna Hossain, a math and philosophy double major and the president of Lawrence’s V-Day chapter, said that attendance at the event was encouraging. Participants, who included members of Sigma Phi Epsilon fraternity, Kappa Alpha Theta sorority, the Sambistas and others, gathered outside the Warch Campus Center for sign making and body painting.

Helen Boyd Kramer, author, activist and lecturer of gender and Freshman Studies, gave a speech so empowering that, Hossain recalled, a woman seated with her children in the cafÃ© spontaneously joined the protestors to walk the entire mile to Harbor House.

Hossain believes that the SlutWalk protest is important for a number of reasons. “The primary reason I want people to know about SlutWalk is because, [while] I think that feminism has come a long way and people don’t hold the same prejudices against women as fifty years ago, [many] people still have a dichotomy. Girls talking about other girls call them sluts and men say [things like] ‘I’d fuck her but I wouldn’t date her.'”

Another problem Hossain sees, particularly at a place as liberal as Lawrence, is the potential for feminism to be thought of as an out-dated movement.

“Many women don’t relate to feminism,” she claimed, and said that events such as SlutWalk help raise awareness in a community that might otherwise be ambivalent to such issues.

“[Some believe] the world is post-feminist and [that they] haven’t experienced sexism. SlutWalk appeals to undergrad women and men all around the world,” said Hossain, and perhaps in a way other feminist movements do not.

Importantly, Hossain also stressed that women are not the only victims of sexual assault, and that SlutWalk is not a sex or gender-based event.

“This is not just a women’s issue,” she said. “Feminism in general affects everyone, men and women or those who don’t fall into gender binary.”

Of course, the issue at the heart of SlutWalk, sexual assault, is the most pressing problem that SlutWalk attempts to face head-on. There are excuses for sexual assault that are widely accepted as legitimate, such as ‘I saw her flirting,’ or ‘what was she wearing?’ Hossian explained, “No matter what people wear or drink or who they hang out with, a ‘no’ is always ‘no’.”

For more information about SlutWalk, or to see pictures from the May 13 event, visit SlutWalk Appleton on Facebook.