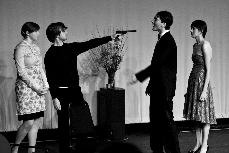 What were you doing last Friday night? Were you partying, dancing or otherwise enjoying the beginning of the weekend? While the majority of us were probably enjoying rather cliché weekend activities, approximately 30 theater buffs were having fun by gearing up for this term’s 24-hour Play Festival.
Starting at 8 p.m. Friday, four writers paired up with four directors and began writing original plays. The next morning, actors were assigned to the plays and spent the rest of the day rehearsing for their performance Saturday night in Cloak Theatre.
After the long night of brainstorming, morning caffeine intake, and all-day preparation, the play fest opened with a play titled “Episode 2,” written by Tamiko Terada and directed by Heidi Robertson.
The scene was presented to the audience as a drama studio in which two actors, played by Mia Lurch and Barry Tomeski, rehearse a scene before their down-to-earth director, Hannah Sweet, and the spacey, meditative Buddhist scriptwriter, Brian Acker.
The two actors do a great job, but the scene’s writing is so bad that Sweet’s character labels it “verbal diarrhea” and constantly interrupts to confront the scriptwriter about the script. From their interaction, the audience surmises that the two were previously involved with each other, and that the terribly written play is actually a bare-boned recap of the drama between the director and the scriptwriter.
The corny dialogue so resembles a bad sitcom that the director finally exclaims, “I would rather punch babies than see the show become a soap opera!” “Episode 2” was witty, fresh and contained many of those thinly veiled sexual innuendoes that college students so appreciate; however, it also explored the human need for interaction through the lens of two characters whose deep attachment ended up causing them great pain. As any good sitcom ends, however, the two end up back together.
“Weeknight,” written by sophomore Provie Duggan, was a rather eccentric work. In the beginning, we meet the first character, a taxi driver played by Kyle Brauer, cleaning his gun and muttering to himself in a dark alleyway before heading back on the road.
Amanda Martinez and Aubrey Neumann played two women who call Brauer’s cab simultaneously and grudgingly agree to share the ride. Brauer’s character serves as a venting mechanism for the two ladies to talk about their problems, and in the end, helps them decide to leave their cares behind for a little while.
Although the actors performed their parts wonderfully, the writing was fairly disconnected and the plot lacked fluency. Luckily, director Byron Grant threw in a brilliant plot twist at the end, implying that the cab driver murders the women and frees them ultimately from their problems, a twist that finally intrigued the audience and saved the slightly deflated plotline.
Andrew Knoedler’s “A Play Where Everyone Dies at the End” presented a group of friends who, while spending time together, happen upon a mysterious script containing their entire conversation.
Sam Flood, Naomi Waxman, Micah Price and Christopher Skinner play the group of friends, who soon discover that the play has a few extra pages, and, upon perusal, that they are going to die at the end.
The rest of the play is a hilarious, jovial commentary on the themes of fate and destiny and the theme of evading death – Waxman’s character suggests that since “theater is open to interpretation,” they could just pretend to be dead, and in the course of the play, Nerf guns and fake stabbings allow the characters to successfully fool “fate” and escape with their lives.
Knoedler’s collaboration with theater newcomer Alex Kohnstamm yielded a fantastic play that was only enhanced by the performance of gifted actors.
The final play of the night, titled “Preparations,” portrays a young man, played by Louis Steptoe, waiting for his date on prom night. As he prepares for his date, played by Rachel Li, his parents, played by Kelly Zacher and Dylan Evans, awkwardly mention that they are international assassins and may not be back in the morning due to a particularly dangerous assignment.
While the son attempts to process their rather tactless announcement, his date arrives and immediately gushes about meeting Mr. and Mrs. Winslow, “the famous assassins.” The rest of the play proceeds through the other characters’ attempts to keep Li’s character from finding out the truth, and in the end, the two are finally able to leave for the prom.
The night was rife with plot twists, however, and the play closed with Li’s character, the now-known spy, sneaking slyly back onto the stage and opening her purse as if to take out a gun or to release some noxious chemical weapon. The acting in this show was quite excellent, with the exception of the family’s terrible English accents, and all in all, it was a great way to end the night.
Everyone involved in the 24-hour Play Fest deserves a hearty “Bravo!” and a round of applause – the collaboration between writers, actors, tech crew and managers on the show provided a splendidly enjoyable evening. The theater department puts on this amazing show once every term, so if you missed out, be sure to catch the next caffeine-fueled production! 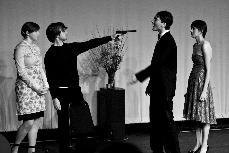