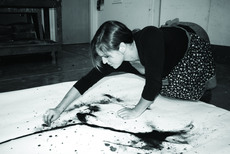 Brief stats: senior English and studio art major from Hopkins, Minn.
Where you’ve seen her: Painting on display in the Wriston lobby, WAC art show last year and a large drawing in the hanging area of Wriston – now migrating to her kitchen should you still want to check it out.
Wilson: So Caroline, why art? How did you decide that you wanted to major in art?
Parry: It’s funny, because when I came here, I had decided that I shouldn’t do art because it wasn’t going to be the practical major and then I decided that what I was doing was stressing me out and I switched from language to art, because it’s so meditational and relaxing. That’s what I needed to be able to prosper at school.
Wilson: So, do you mostly paint?
Parry: Drawing and painting, but mainly drawing. I love charcoal because it’s such a mess, which is why I still have charcoal on my hands from yesterday. My hands end up being permanently black during class for a couple months at a time, so people just think I don’t bathe.
Wilson: Well I mean, you are an artist …
Parry: Yeah, we’re not really supposed to bathe.
Wilson: It seems that often when you’re talking about your art, you liken it to meditation and yoga.
Parry: I guess it was just the way I learned to vent when I was stressed out. I felt like when I first came here for language I thought that was a way but I realized that art was more meditational. So when I do art, I want to surround myself with the right music and create the right atmosphere.
Wilson: So do you think those aspects manifest in your art?
Parry: I think it definitely manifests in art in that my art is more abstract because I try to really vent all of my emotion in it, and that’s why, while it might have an image I’m trying to portray, the image is secondary to what the colors or brushstrokes might promote.
Wilson: In the future when we read about the “Caroline Parry style” in textbooks how do you think it’ll be described?
Parry: Hah. Well actually, my lovely art professor in high school likened my style to the Cellulite artists of the past. My lines are really squiggly and loose and round. I do not do straight lines, and they’re not going to be neat and minimalist. I like to have a lot going on. She was talking about naked fat women – that was my art.
Wilson: What can we expect to see from you in your last year at Lawrence?
Parry: Well, I do have a Mudd gallery show in February that will be a show of my large-scale charcoal drawings. I fill balloons with charcoal, add water and then blow them up on paper. [These works are] inspired by the Chinese artist Cai Guo-Qiang. Usually they’re at least six feet tall because I want them larger than life. I’m all about wild and crazy charcoal explosion.