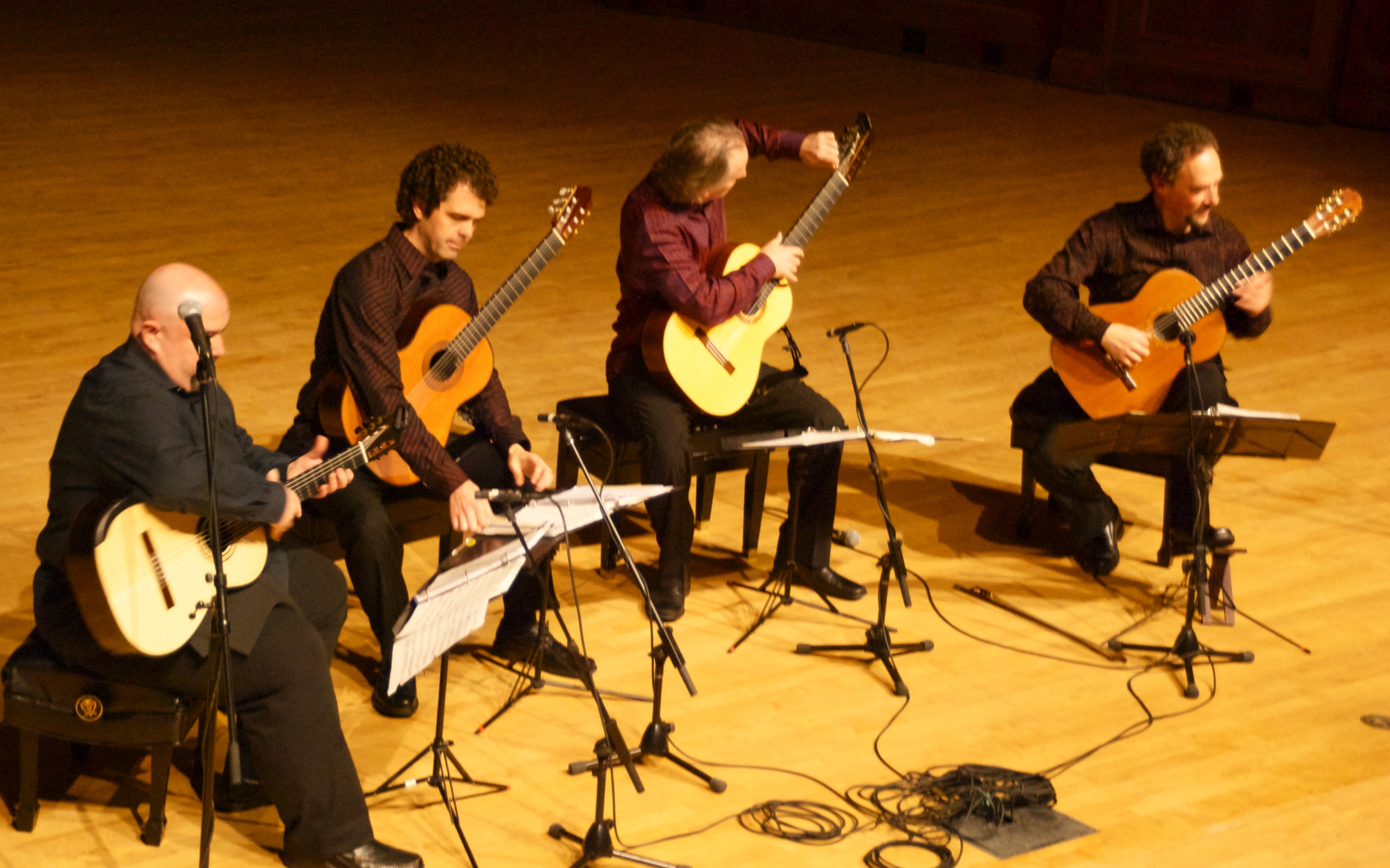 Guitar has been cursed, in a way, by its omnipresence in popular music; extreme compression has rendered the instrument’s tone a flat, loud electronic signal. Not so, however, in its traditional forum. The dynamics, phrasing and techniques of classical guitar are impressive without the need for effects or amplifiers.

The Los Angeles Guitar Quartet’s performance at Lawrence Saturday, April 16 reaffirmed the evocative nature of the instrument, covering a broad range of melodic and percussive sounds with only four musicians onstage. Their two-hour set covered a breadth of classic and modern repertoire, and emphasized their skill as an ensemble.

Most audience members must have recognized the LAGQ’s first piece, an arrangement of the Overture to “The Barber of Seville” by ensemble member John Dearman. A few Loony Tunes chuckles aside, the piece sounded quick and lyrical, and set the group’s tone for the evening. The famous piece impressed those less versed in conventional Spanish fare, using a common point of musical reference to lead into the program.

Following the “Capitol Suite,” a 20th century composition based on Renaissance dances, the group began the show’s longest and most vital group of songs, “Music from the Time of Cervantes.” Arranged by member William Kanengiser, the collection of 11 works derived from the Quartet’s collaboration with John Cleese; the actor read excerpts from “Don Quixote de la Mancha” over compositions contemporary with that work.

Though the performance Saturday had no readings, the set was evocative, summarizing the era’s musical conventions and establishing an emotional arc similar to Cervantes’ tale. The first selection, “Jácaras,” was rousing, and the following movements seemed idyllic up until “La Tricotea Samartín,” the whirling, intense piece corresponding to Quixote’s battle against the windmills.

The triumphant romanesca compositions contrasted the balladry of the “Fantasia Que Contrahaze La Harpa,” which emulated an airy harp. Ultimately the set, which concluded with the declarative “Oy Comamos y Bebamos,” distilled music and literary history for the audience.

“Antique Suite,” a composition by the group’s college friend Ian Krouse, offered both a more Germanic and more modern listening experience, and included a bowed-guitar section and interesting use of tonality. The “Suite” led nicely into the group’s most conceptual piece, “Cuban Landscape with Rain,” a simulation of a rainstorm which broke into a hail-evoking section of discordant slapped strings. The two modern pieces offered the quartet a showcase for their more technical dexterity on their instrument.

The group concluded their performance with selections from “Carmen.” These distinctly Spanish numbers, though penned by a Frenchman, had an expansive, stomping sound well suited to the group’s dynamic style and instrumentation. Once again hearkening to commonly-known classical music, the suite touched on all the opera’s famous moments — “Habanera,” “Toreadors,” and more. The ensemble made such famed excerpts sound extremely natural in the guitar setting.

Offering both fresh-sounding interpretations of classic works and precise performances of modern pieces, the Los Angeles Guitar Quartet provided its audience with a complete picture of the guitar’s capabilities in a lively evening of brilliant technique and artistry.