Haunting Melodies: Betty and the Boy perform in the CafÃ© 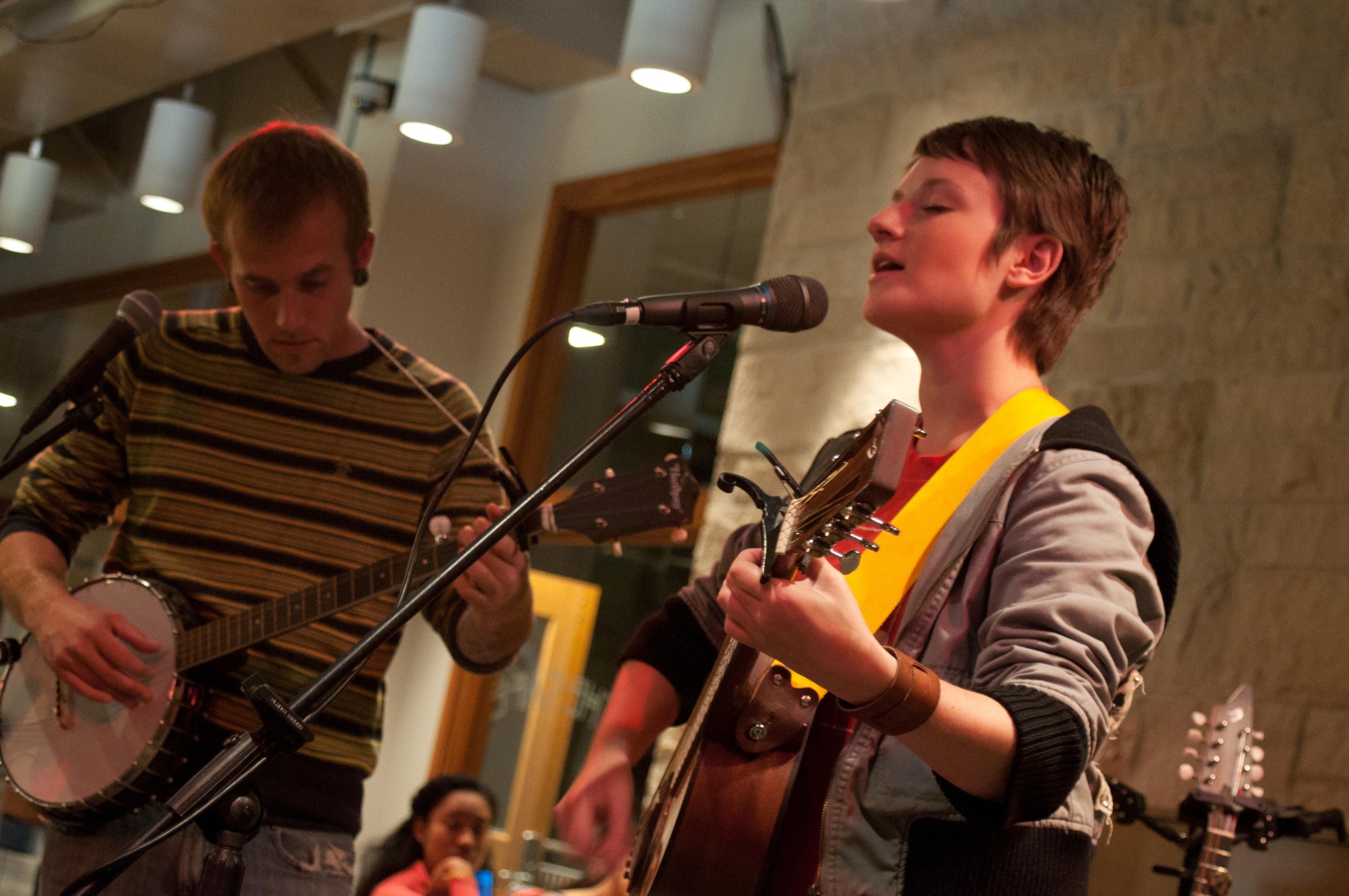 If someone were to ask me to sum up Betty and the Boy’s performance on Sept. 20 in the CafÃ© in a word, I would probably say “Goosebumps.” There I was, sitting at a table. A meter away from me stood Betreena Jaeger with her acoustic guitar and Josh Harvey with his mandolin getting ready to perform. Around me were other Lawrentians eating or studying.

It was just another Thursday night at the CafÃ©. No one was really paying attention until Jaeger’s sweet, saccharine voice came over the speakers. This was the first time that Betty and the Boy performed here and hopefully this will not be the last.

With a voice that brings to mind Meredith Godreau of Gregory and The Hawk, Montana native Jaeger’s whispy and haunting vocals echoed softly throughout the CafÃ©. Accompanied by plucking from an acoustic guitar and the occasional mandolin or banjo from Harvey, their sound is light and tender, reminiscent of the kind of comfort found after running home from a bad day.

Harvey’s voice, heard on a few songs that night such as “Good Luck” and “Building It Up,” is husky, strong and a fantastic contrast to Jaeger’s vocals.

As a huge fan of folk music myself, I was very excited to hear that their music was more than folk. Not only folk-acoustic, Betty and the Boy is a bit of bluegrass and nice minimalist rock thrown in there as well to create a truly unique and original sound.

The first song of the thirteen song set, “Mock the Light,” called to mind creepy circus music with a noticeable dwindling in conversations occurring around the CafÃ©. The set was primarily based around songs from their most recent EP Good Luck.

Their lyrics tell tales about love and loss – things we can all relate to. Several, if not all of their songs caught me off guard with their emotional and vulnerable lyrics.

The song “My Ghost” talks about Jaeger beckoning her ghost to come with her on a wintery night to find out if there is any light at the end of it all. Another song, “Pennies,” talks about saving others as a way of trying to get out of a world where she has become a corporate slave.

The heart breaker “Babel” is a story of meeting one’s past self and feeling full of regret. Sadness and nostalgia are also prevalent in the track “Gardens and Things.”

I enjoyed myself as I sat there listening to Betty and the Boy, but only after several songs had gone by. After about five or six songs, the tracks tend to blend together a bit, and the varying guitar picking as well as progressions become less and less noticeable.

Needless to say, if you are looking for something to accompany you on a lazy afternoon while you study or ride a bike around campus, this is one of those albums you should plug into.