Iris out: the Oscar-nominated “Dogtooth” 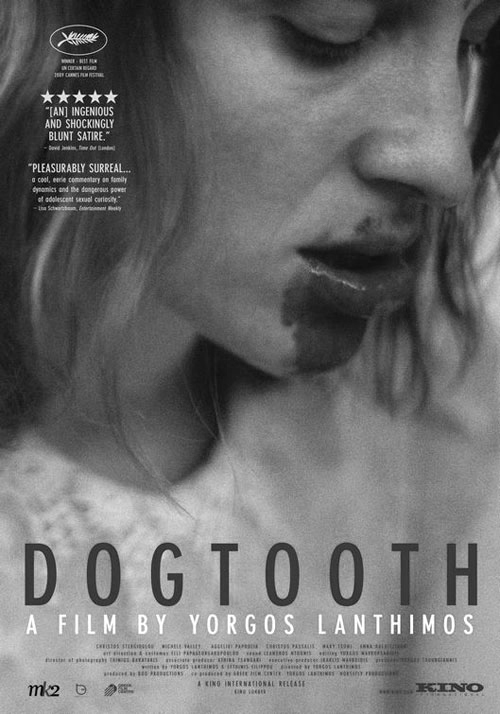 “In A Better World,” a film from Denmark, won the Academy Award for Best Foreign Language Film on Feb. 27, 2011. Instead of focusing on this film, though, I’d like to review “Dogtooth,” a film from Greece that did not win the award. It’s surprising that the film managed to get a nomination from the Academy, considering its controversial theme of incest and graphic sexual content.

“Dogtooth” tells the story of a family of five who live in an isolated compound. Only the father leaves to go to work and shop, while the mother and three 20-something children stay home as if it were a prison. The film is unsettling from the start, and it’s never explained what is happening or why. All the viewer can understand is that the children — known only as the Eldest Daughter, the Younger Daughter and the Son — have never left the compound, and that they have not been given a proper education. They are constantly told the incorrect definitions of words.

A woman named Christina further complicates matters: She is brought in by the father blindfolded to have sex with the Son. The father, though, does not expect for Christina to ruin the “idyllic” world that he has created for his family. Because they are not explained, these scenes with Christina have a comic feeling to them, which is an odd decision on director Giorgos Lanthimos’ part. While her character is necessary to further the plot, her presence and the events that arise as a result are a little too obvious.

Christina’s departure leads to the father’s decision that the Son must choose between the two daughters for a new partner. While incredibly disturbing, Lanthimos seems to suggest that this is not quite incest. The children are completely unaware that what they are doing is wrong, because they do not have any knowledge of what sex is or the traditional values surrounding sex in society. This is highlighted in an earlier scene when they are told that a certain explicit word for a sexual organ means light switch.

It is these instances of incest that highlight the impressive directing of Lanthimos. While in any other film the idea of incest would be entirely taboo, throughout “Dogtooth” the children are not portrayed as human beings, so Lanthimos creates a slightly different situation. In nearly every scene, he films the children from the neck down. This is at first very jarring, but as the film progresses it comes to highlight their otherness. It’s as if Lanthimos is saying that viewers should not understand these children as human beings because they have not been taught any social norms.

The film tells an intriguing yet haunting story, but it is hard to enjoy as a result. By the end, I found myself wanting answers that I assumed I would be given, but they never came. We are never told why the Father has raised a family like this, or even why the Mother goes along with it.

The film also hints that another son lives on the other side of the compound, but his existence is never proven. The Father only tells the children that he lives safely on the other side but cannot come back because it is too dangerous.

I still have not formed a complete opinion of the film, but it has stuck with me. If you ever want to watch a film that will both haunt and fascinate you, then give “Dogtooth” a chance. It is an undeniably powerful film and it is no surprise that it ended Greece’s 34-year drought of having an Academy Award-nominated film.