Football holds on, tops Beloit in the end 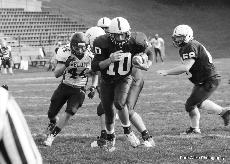 The Lawrence University football team defended its home field against Beloit College last Saturday. The Buccaneers mounted a comeback in the second half after Lawrence had built a big lead in the first, but Lawrence managed to hold on for a 29-23 win.
The Vikings’ defense controlled the first three quarters of the game with four interceptions – two by freshman Luke Galle – and one fumble recovery to help them pull out to a 26-point lead.
In the first quarter, Lawrence (2-7, 2-6 MWC) started the scoring with a short pass from sophomore quarterback Tyler Mazur to senior wide receiver Jeremiah Johnson. The defense, meanwhile, held strong and kept the Buccaneers from scoring.
Beloit (4-5, 4-4 MWC) was only able to put up 3 points in the first half, with a field goal coming in the dying seconds of the second quarter. The Vikings took a 9-3 lead into halftime.
The Vikings continued to perform well in the third quarter, and into the start of the fourth quarter. Mazur ran for three touchdowns, one of which was bruising 27-yard rush, to give his team a commanding 29-3 lead.
As has happened so many times this season, the Vikings lost their focus late in the game, and Beloit started to claw their way back into the game. Beloit passed for two touchdowns and ran an interception back for another, bringing the game to within a one-score margin.
After the Buccaneers’ final score – a touchdown with 53 seconds left on the clock – the score stood at 29-23, and Beloit attempted an onside kick. Galle was able to recover the kick, however, and the Vikings were able to burn out the clock, preserving the score as a 29-23 victory, the Lawrence’s second of the season.
For his impressive defensive efforts in the game, Galle was named the Midwest Conference Player of the Week.
The Vikings’ have their last game of the season this Saturday against fierce rivals Ripon in another edition of what is the oldest collegiate football rivalry in the state of Wisconsin. The game will take place in the Banta Bowl with kickoff at 1 p.m. 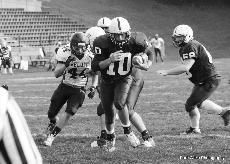