Audience members listened to the stories of panelists and asked questions at the end of the presentation.
Laura Streyle 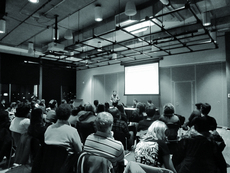 Audience members listened to the stories of panelists and asked questions at the end of the presentation. (Nhi Nguyen)

Members from the Lawrence University and greater Fox Cities communities met on the second floor of the Warch Campus Center for a discussion panel event on sexual assault called, “Not Just a Straight Girl’s Issue” Thursday, Jan. 20.
The idea for “Not Just a Straight Girl’s Issue” formed last term when juniors Maggie Schmidt and Meghan Hickey noticed that too many Lawrence students are not aware of the various on- and off-campus resources available to victims of sexual assault.
To remedy the student body’s general lack of knowledge about how to seek help if they should ever become a victim of sexual assault, Hickey and Schmidt decided to gather representatives from local organizations that deal with sexual harassment and assault so they could provide information on services they offer.
“All of the people who are available on and off campus are really awesome and want to help,” said Hickey.
Panelists included Assistant Director of Counseling Services Paul Valencic, Appleton Diversity Coordinator Kathy Flores and Communication and Grants Coordinator at the Sexual Assault Crisis Center Emily Bowles.
Valencic, a member of the Sexual Harassment and Assault Resource Board, described the committee’s role in helping the victim decide what action he or she would like to take after an assault, stressing the strict confidentiality that is maintained during this process.
Valencic noted that on the Lawrence campus, sexual assault is “not just happening to women – men are experiencing this too.”
Flores’s portion of the panel echoed and expanded on Valencic’s statement, making it clear that sexual assault does not only happen to heterosexual women. Flores provided a handout for attendees, which stated that between 25 and 33 percent of relationships between LGBT partners include abuse, a rate equal to that of heterosexual relationships.
“There are fewer people in the LGBT community,” said Flores, “and victims fear they’ll be blamed because they’re seen as deviants.” Flores went on to say that intensive training is happening every day to break down barriers for victims in the LGBT community, and to teach crisis center employees about how to better help LGBT victims.
Bowles presented additional help that can be sought from the Sexual Assault Crisis Center in Appleton, saying that “people receiving calls on the crisis lines are trained not to assume anything about the caller, except that they are asking for help.”
Following the panel discussion, students had the opportunity to peruse a resource fair in the back of the Hurvis Room. Here, students were able to speak with campus and community organizations that are actively aware of issues dealing with sexual assault.
Among the organizations represented were the two sponsors of the event: the Lawrence Wellness Center and the Gay, Lesbian Or Whatever club. Harbor House and V-Day were also represented.
Freshman Annesley Clark, a representative of GLOW at the resource fair, said she was pleased with the event and that “everyone should be required to attend.