Women’s soccer to compete in playoffs 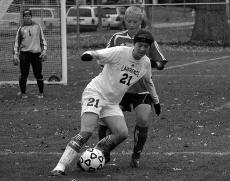 The women’s soccer team has
earned the fourth spot in the Midwest
Conference Tournament despite a
heartbreaking non-conference loss
against UW-Oshkosh in the second
overtime period.
Lawrence and the Titans were
stuck at a stalemate for 104 minutes
until UW-Oshkosh freshman Becca
Blue deflected a Kelsey Spaith corner
kick into the net, ending the match
instantaneously. Despite the loss,
the Vikings took a positive attitude
away from their effort, carrying their
energy into a must-win game at
Ripon.
For Lawrence to qualify for the
MWC Tournament, the Vikings needed
to defeat seventh-place Ripon
on Saturday while the Monmouth
Fighting Scots beat Beloit and lost to
Lake Forest in their weekend games.
The Viking took care of their end of
things by thrashing Ripon 3-0. The
rest was up to Monmouth and fate,
and both played in Lawrence’s favor.
With their season on the line,
Lawrence played shutdown defense,
holding Ripon to just two shots
on goal, both of which were saved
by senior goalkeeper Lindsey Ahlen.
Ripon was forced to play defense
for almost the entire match, allowing
three goals despite goalkeeper
Angelica Cooper’s 11 saves.
Junior Sarah Ehlinger had a great
performance to finish her season,
netting a Mallory Koula-assisted goal
in the 40th minute and a 77th-minute
strike on a Celesta Kirk assist.
Koula added another goal for good
measure only two minutes later,
while Annie Kaiser added her third
assist of the season.
Ehlinger earned MWC Offensive
Player of the Week after her brace
as she moved into fifth place on
Lawrence’s career list with 28 goals
as a Viking.
In addition, Ehlinger was named
to ESPN The Magazine’s Academic
All-District 5 second team based
on strong performance in the classroom
and on the pitch. Ehlinger
was the only Midwest Conference
player chosen from District 5, which
encompasses all schools in the states
of Illinois, Wisconsin, Minnesota and
Indiana.
The Vikings will hope to earn
a berth into the NCAA Division 3
Tournament this weekend as they
look to upset Carroll University.
Despite the strong finish to their season,
the Vikings are heavy underdogs
against the Pioneers, who have won
the past three MWC Tournaments,
possess a 9-0-0 conference record
and home-field advantage, and beat
Lawrence 9-2 in Appleton earlier
this year.
If Lawrence can get past Carroll
in their 7 p.m. game, they will face
the winner of Lake Forest vs. St.
Norbert on Saturday, with the winner
earning a berth in the 2009 NCAA
Division 3 Tournament, which begins
Nov. 12. 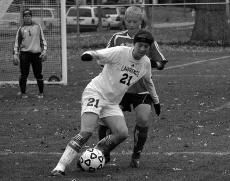