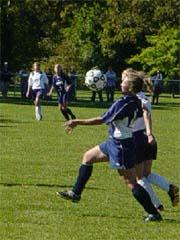 The Men’s Soccer team’s performance this past weekend deserves nothing short of a comparison to an Eddie Van Halen guitar solo. Not only was their game play fast and structured, but it was incredibly cohesive and varied as well. Spandex-laden rock references aside, the Vikings took to the pitch last weekend knowing that their games with Grinnell and Knox were going to be important in their attempt to establish themselves as conference contenders.

Saturday and Sunday marked the annual Parent’s Weekend for both the men’s and women’s teams and featured the introduction of the players and their families before kickoff on Saturday.

Only a few players from both teams were left unrepresented, and they were generally taken under the wing of another family. Everyone was treated to four great games, in which the Lawrence teams claimed three victories.

Grinnell came into Saturday’s match-up unbeaten in the MWC, and they managed to hold off a dominating Viking attack through most of the game. That trend ended in the 72nd minute as a freshman trifecta went to work, with Klas Berghede and Lisandro Lopez del Valle assisting and Rodrigo Gomes scoring. Adam Miner slotted a security score in the 81st minute from Gomes and Cole Brittain to put the cap on the pickle jar.

Sunday’s game against recent conference whipping boy Knox College started slowly for the Vikes. A smidgen of disarray could be sensed in the early goings of the first half, as Lawrence was not taking Knox seriously. Nonetheless, Knox was soon tied up in knots as an onslaught of goals began, with a rebound blast from freshman Michael Sloop in the 31st minute.

From there on out things were gravy. LU kept play completely under control with absolutely spectacular ball control. The fullbacks and outside mids worked the ball up the field magnificently with sequences of short, controlled passes, followed by accurate long balls over the top to space.

If assistance was needed through the middle, Jesse Belcher provided brilliant footwork, leaving defenders in shock. The second half was all one beautiful, seamless attack for Lawrence.

Of the later goals in the game, some featured exceptional style. Elliott “Bobbo” Spruell flashed his elegant blonde locks on a gorgeous header to go up 2-0, and Gomes and Brittain each scored to stay atop the team lead for goals.

After senior Mark Wendling converted a through ball in the 89th minute, he and senior Brian Payne displayed “the Lawrence Difference” with a celebration consisting of a historical recreation of “Washington Crossing the Delaware.” Freshman peons Brian Harks and John Dunbar manned the oars.

“We’ve been waiting four years to do that!” exclaimed senior Dimitri Gooden as he captured the moment on the team’s video camera. All in all, nine separate players have now scored for Lawrence, for a total of 21 goals in only nine games.

Overall, Sunday’s game was a spectacle of brilliant and entertaining soccer, ending in a 5-0 win for the good guys.

LU continues their home stand against their loathed opponents from the south, Ripon College, on Wednesday the 15th. The Vikings seek vengeance against the Red Hawks after last year’s disappointing loss.

Everyone is strongly encouraged to attend, for it promises to be a rowdy, obnoxious, and belligerent game for the Ripon team.