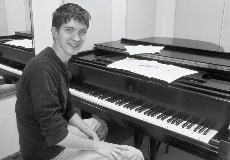 If you’ve been around the campus center café for Monday nights, you’ve probably noticed the weekly jazz sessions featuring Carl Kennedy on piano. Kennedy, a senior music theory and composition major with a jazz emphasis, got his start in jazz in his hometown of Kenosha, Wis., with some help from his middle-school band director, Ken Wiele. Said Kennedy, “He was the one who really encouraged me to improvise and taught me the basics of jazz … I guess it just kind of bit me.”
Since then, Kennedy has only continued to explore his musical capabilities. Though he’d played piano all through high school, Kennedy came into Lawrence as a trumpet player.
“I’d only ever played jazz on trumpet and I knew I wanted to play jazz, so I stuck with trumpet,” said Kennedy. “Last year I started studying composition with Fred Sturm and piano with Lee Tomboulian. At that point I wasn’t even thinking about switching – and then all of a sudden I had options.”
Clearly, the switch has paid off for Kennedy; this weekend is Jazz Weekend at Lawrence, and Kennedy will be quite busy. Tonight, the Hybrid Ensemble will be premiering Kennedy’s arrangement of “There Will Never Be Another You.”
Kennedy explained that he’d “never done anything for voices before, so I decided to try it. I e-mailed it to Phillip Swan just for feedback … I guess he liked it!”
Saturday, Kennedy will also be playing with the Jazz Band’s performance at 1:30 p.m. and with his jazz combo at 3 p.m. in Harper.
The performances this weekend are sure to showcase Kennedy’s talents. If you can’t make it this weekend, Kennedy can often be found in Appleton venues playing with friends. 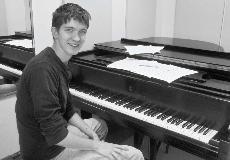