“Romeo and Juliet” receives a makeover 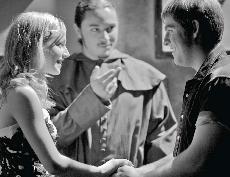 “Romeo and Juliet,” in a newly cut version written by Professor Timothy X. Troy and Lawrence University alumnus John Maclay, sold out every performance in the Cloak Theatre Thursday, Oct. 29 to Sunday, Nov. 1. The sold-out show was the Lawrence Department of Theatre Arts’ fall student production.
Shakespeare’s contemporary audiences knew the city of Verona as the setting for “Romeo and Juliet.” This was the place where an “ancient grudge break[s] to new mutiny/ where civil blood makes civil hands unclean.”
Walking into Cloak Theatre last weekend, audiences were presented with a newer Verona: the setting moved forward a few years and across an ocean to the 1980s Jersey Shore. Instead of cobblestone streets and immaculate balconies, there were remnants of abandoned carnival games and flimsy fire escapes.
The leather jackets, golden chains, clashing colors and bright lipstick were just a few aspects of the costuming that brought flashbacks of the ’80s, which college-aged viewers could appreciate while following the classic tale.
In lectures given to classes before performances took place, Troy explained that updating the setting of the play was in part motivated by the historical and cultural context of the ’80s Jersey Shore, as it was in the midst of a transition from a tourist dreamland to a tacky second-rate destination.
However, while the interfamily clash was obvious during the play, the influence of the historic Jersey upheaval on the families was not conveyed to the audience as clearly.
In contrast, music rather unambiguously held the production together with a common theme of ’80s tunes. The music of the ’80s R & B band Earth, Wind & Fire and the boss of heartland rock, Bruce Springsteen, helped set the mood for Troy’s version of the play. Early in the performance, the whole cast gathers to get its Shakespeare groove on to EWF’s catchy hit “September” at the Capulet’s party.
The production was a rollercoaster of scenes, zipping by quickly and breathlessly. Many scenes that were not central to the romantic plot were cut, and language from the First Folio edition of Shakespeare’s texts was upheld.
Though the brutal timeframe of 80 minutes accentuated the rapidity and volatility of the plot and left little time for rationalizing the series of the two lovers’ dizzying decisions, the weight of the story’s crash had a softer impact because the relationship between Romeo and Juliet was not given its full time to develop.
Troy said that his view of the play, whether set in Verona or the ’80s Jersey Shore, is that the city is governed by Mercury, with uncontrollable twists in emotion that usurp the mind and make for violent interactions. Viewers saw the volatility of Troy’s conception of “Romeo and Juliet” in the form of the crowbars, bats and knives that were used to kill in the same breath that a character expressed his deepest love and attachment.
All in all, the new “Romeo and Juliet” was perhaps a bit ambiguous in places because of the new 1980s format, but overall was successful due to the great work of the cast and crew involved. 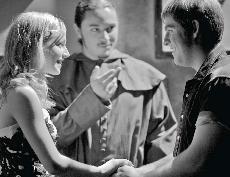