Smith Westerns save rock and roll with “Dye it Blonde 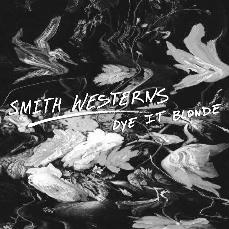 Rock and roll is at its essence an expression of simple emotion. Joy and frustration have both served many budding songwriters well, particularly when underscored with a vague sexuality. Joy and frustration have provided the soundtrack for many a juvenile pariah’s game of “she-loves-me-not” over the past 50 years.
However, sometimes these same juveniles start soundtracking their own heartbreak. Tony Moon once scrawled “This is a chord / This is another / This is a third / Now form a band,” and many fine young men and women with a bone to pick or a love to proclaim have picked up guitars and laid down the law.
The most sublime rock music tends to wear such feelings on its sleeve, because the result is at once strikingly real and universally applicable, like “(I Can’t Get No) Satisfaction” or “I Want to Hold Your Hand.”
Unfortunately, the songwriting emerging from a teenager’s amp tends to lack refinement, or even listenability. Not so with the Chicago group Smith Westerns, whose second record “Dye It Blonde” was released last week.
The band comprises four young rockers, none older than 20, an impressive statistic for a band of their caliber. Quoting the seminal “Nuggets” collection of 1960s rock and the glam of Bowie and Bolan, the group’s self-titled first record evidenced a mastery of rock writing underneath several layers of distortion and tape hiss.
The skuzzy lo-fi sound wasn’t the lynchpin of the record, though. Many crews barely manage to make their music interesting by burying the songs in fuzz and noise, but Smith Westerns can excel simply with songcraft.
The boys left their distortion pedals at home when they opened for Belle and Sebastian in Oct. 2010, and left a laudably intricate, though noticeably meek impression, proving their underlying sound was as a pseudo-Invasion-era guitar group.
“Dye It Blonde” follows up on that performance’s promise of greatness and of escape from the fuzz, aiming squarely at a glam-rock sound so out of fashion that some have been sticking the record with the fashionable “dream-pop” tag.
The guitars have cleaned up, for the most part; the vocals are breathy and intelligible; there’s plenty of piano, most transparently on “End of the Night.” Lead single “Weekend” heads off the record with saturated guitar licks and honest-to-God “na-na-nas,” and by the time “Dance Away” changes style for the third time from Strokes-style hop to hair-metal riffage to disco shuffle, the record seems like an undergraduate thesis in pop-rock.
It’s all very innocent at first glance – young lads rejecting more decadent forms of modern rock to play something of which their parents might approve, or to which the members may have been conceived. The lyrics surprisingly cement that impression and stay closer to the realm of handholding, with platitudes like “Weekends are never fun / Unless you’re around here too” and “We’ll dance the night away.”
“Imagine Pt. 3” has a little “touch. too much,” but also a plea: “Love and lust / How come that is such a must,” ensuring that even when things start getting sexy they’re rooted in a virginal doubt.
Many critics have made issue of Smith Westerns as a puerile group shooting too high, leaving the garage with a certain naivety – “Dye the World” instead of “die, the world!” Yet it’s precisely this sort of optimism that most rock groups have abandoned, either for more experimental shores or for a cool skinny-tie sort of cynicism.
Pop radio is full of angry men and cooing starlets, and that’s why it’s important that some young blood decided to try and answer Marc Bolan’s question: “Whatever happened to the teenage dream?”
It waited to resurface, it seems, until 2011. Smith Westerns seek a Lennon-esque universality and an unfortunately anachronistic happiness, and they get damn close on this record. Maybe someday they’ll even be – dare I say – rock stars.