THE 2003 WORLD MUSIC SERIESl at Lawrence featured IndUS, an Indian percussian quartet. Performances will continue throughout the year.
Chris Swade 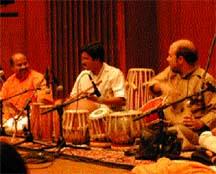 THE 2003 WORLD MUSIC SERIESl at Lawrence featured IndUS, an Indian percussian quartet. Performances will continue throughout the year. (Quinn Lake)

The 2003 World Music Concert Series at Lawrence University opened with a bang this past Friday night, Oct. 3, in a packed Harper Hall. For the series premier, LU teamed up with IndUS of Fox Valley and Thrivent Financial for Lutherans to bring the Indian percussion quartet Tarang to Appleton.

IndUS of Fox Valley is an Indian-American organization which strives to promote Indo-American friendship and goodwill through social and cultural activities and events.

The purpose of the World Music Series is to expose LU students and the Appleton community to a variety of musical traditions from all over the world.

While diversity of sound and style can make the performances difficult to compare to one another, the level of audience enthusiasm can be an excellent gauge of the effectiveness of these performances.

Tarang is composed of four members who play a variety of traditional Indian folk and classical instruments. Abhijit Banerjee is the founder/leader of the ensemble.

Banerjee has been recognized as one of the elite contemporary Indian musicians. Banerjee was joined by Somnath Royon on Ghatam and other traditional Indian percussion instruments. A Ghatam is a large clay pot-like instrument common to the south of India.

Royon served as the secondary timekeeper, reinforcing Banerjee’s intricate rhythmical playing and maintaining the pulse in order to allow Banerjee to dominate.

The ensemble was rounded out by two additional musicians: B. Rajshekhar on the morsing (a Jewish mouth harp) and Snehashish Majumdar on Mandolin.

Majumdar is one of the only musicians to have adapted the mandolin into the art of Indian classical music, and is further distinguished for his use of a double-necked mandolin, of his own invention. The instrument has strings in two different registers and timbres, somewhat similar to the double-neck guitar made famous in the 1970s by Jimmy Page of the British rock group Led Zeppelin.

The compositions that the group played were extremely complex in terms of rhythm and form. This is typical of Indian classical music. Yet the performers managed to make the music accessible and fun for the untrained ears of the audience.

In most Western musical environments, including jazz and classical music, the focus is on the melodic voices present. However, the performance given by Tarang was geared toward demonstrating the use of percussion instruments as equally important to the melodic voices in Indian Music.

In fact, Majumdar’s virtuosic mandolin playing, while both richly melodic and rhythmically intense, served more to accompany the percussion voices than as a focal point.

The performance overall was successful in giving an audience that was largely new to Indian music a very positive first impression of this sophisticated tradition.

The World Music Series will continue with several more performances throughout the year. For more information on future dates, artists, etc., contact the LU conservatory office at campus extension 6611.

Those interested in learning more about Indian classical music may want to check out the IndUS of Fox Valley website at http://www.indusfoxvalley.org.

IndUS of Fox Valley will also be hosting its annual benefit dinner with this year’s theme of “Folk Arts of India” in the Buchanan Kiewit Center on Nov. 8. Information and tickets are available via the IndUS website.