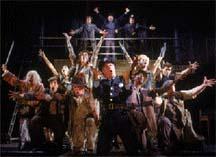 Everywhere Urinetown: The Musical goes, a flood of praise follows. Having emerged from the New York International Fringe Festival to Broadway with a force that earned showers of nominations and awards, the reports that this show is a must-see must be true. Even when Sept. 11 dampened its Sept. 13, 2001 opening and closed most of Broadway, people flocked to Urinetown: The Musical for a strangely satirical, twisted, cathartic entertainment. But why?

The story surrounds two young people who fall in love in a city in the middle of a water shortage-a town where people have to pay to pee. The hitch: the girl’s father just happens to be the corporate tyrant who imposes the pee tax and uses the haunting concept of “Urinetown” to enforce it.

Without ruining the “ending,” by all means don’t expect a moral. At one point, Little Sally, the narrator’s child-wise sidekick, asks the question on everyone’s mind. “What kind of musical IS this?”

Although claiming to deal with larger issues of greed, corruption, and sustainability, the goal of the production is certainly not to be preachy or poignant. Instead, they’re more concerned with producing an uproarious show filled with bladder-blowing shtick.

The show’s cheesiest numbers (“Follow Your Heart,” “Run Freedom Run,” and “I See a River”) provide a thin moral. The most direct message, however, comes from the show’s narrator, Officer Lockstock, who asks Little Sally, “Don’t you think people want to be told that their way of life is UNSUSTAINABLE?!”

But who wants to listen to that? It’s funnier to laugh at it; the cast certainly does.

The hilarity of the show rests in its Brechtian awareness. Nearly every scene includes an interlude between the narrator and Little Sally. These interchanges continually ground the audience in the show’s ridiculousness.

The show is SO aware of itself and its place among the canon of musical theatre that it can’t help but make fun of itself. Musically and conceptually, Urinetown subtly pays blasphemous reverence to Annie (the Hooverville characteristics of Public Amenity #9), West Side Story (the forbidden love), Les Misrables (the crushed revolution), Fiddler On The Roof (the klezmer dance finale), and scores of others.

Urinetown also adheres to the “How to Make a Modern Musical” formula by including the gospel song, the cabaret song, the jazzy dance number, the love duet, and the comic bad guy song (two, in fact).

In addition to singing well and generally acting well, this cast delivers superb comic timing and a powerhouse sound. Of particular note is the highly amusing performance of Tom Hewitt (Officer Lockstock), the money high notes of Charlie Pollock (Bobby Strong), and the sauciness of Beth McVey (Penelope Pennywise).

Though all of the theatrical offerings at the PAC so far have been Broadway smashes certain to reap profits, Urinetown is the edgiest one yet. Also welcome is the attempt to extend student-friendly prices. With the exception of Saturday night, students can purchase tickets in advance for $27.

Furthermore, this production happens to be the first Broadway series show offering student rush tickets. By arriving at the box office one hour prior to curtain, students can pay $18 cash for any available seats. For more information, dial the PAC ticket office at (920)730-3760.