Over-crowding at the Conservatory a problem for some Lawrence students

Conservatory students piled into a practice room to illustrate the desperation behind their view of practice room competition.
Jonathan Isaacson 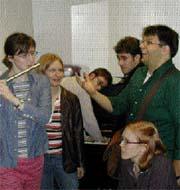 Conservatory students piled into a practice room to illustrate the desperation behind their view of practice room competition. (Quinn Lake)

It is notable that the conservatory population did double between the years of 1990 and 2000, but Stannard said since then the conservatory faculty “did a lot of planning and decided to keep it around [what it is now].”

This year, Stannard said, the conservatory took in a number of students that was “on the low side of the target window.”

He said, “There are two things that a music school can’t have two many of: lockers and practice rooms.”

Stannard said that there are “no concrete plans” to add additional practice facilities to the conservatory.

However, he mentioned the facilities survey of the entire school that was done several years ago. As a result of this survey, a prioritized list of possible construction projects was created. The first item on that list was the new residence hall. Also on that list are a new union and a possible addition to the conservatory.

Stannard added, however, that since the new dorm has just been finished and “with the economy being what it is, there hasn’t been a decision to move ahead with [more construction] at this moment.”

But while the total numbers in the conservatory have not seen any dramatic change, certain areas have seen increased numbers, and in the opinion of at least some conservatory students, have caused some problems.

Jeni Houser, a junior vocal major noted that the biggest problem she has seen has been in the weekly studio classes, when the students get to perform in front of their peers.

She explained that this was a problem in that these performances for peers is a chance to learn a lot in a performance situation.

Not all students are completely unhappy with having so many students in their studios.

Susy Gates, a senior vocalist, said “It’s easier to compete in the graduate world,” explaining that coming from such a competitive undergraduate program makes it easier to enter the extremely competitive world of graduate school.