Lawrence now has cheerleaders. It isa great week for them, with the football team pulling gracefully out of its slump. The added spirit can’t hurt.
Jennifer Nummerdor 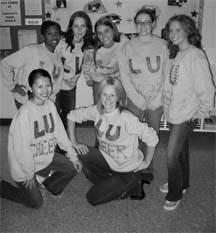 Lawrence now has cheerleaders. It isa great week for them, with the football team pulling gracefully out of its slump. The added spirit can’t hurt. (Julient Poncet)

Spectators at Saturday’s football game may have noticed an addition on the field-the LU Dance and Cheer Team. Comprising 11 members, the team was actually founded last year by Kim Duncan, Volha “Olia” Shapel, and Sandy Vang, but Saturday marked their debut performance. Since Lawrence had no dance or cheer team before last year, the girls felt it was a necessary addition to the Lawrence Athletic Department.

Many people also share their view. “[We are] overwhelmed by the support from the parents!” said Kim Duncan after the first game. The team is also thrilled by the support from members of the Athletic Department and fellow students. Their next step, however, is to gain the economic support needed to sustain the team in the following years.

The team was officially recognized by LUCC toward the closing of the 2002-2003 school year and was given a small sum of money with which to buy uniforms.

Unfortunately, they were only able to purchase a few skirts and shoes with the funds, and even then it wasn’t enough to supply the whole team. The right kind of footwear, explained Duncan, is essential for preventing injuries.

Lack of proper uniforms, though, hasn’t changed the dance and cheer team’s mission: to have fun. They practice four days a week and cheer at the games during the football and basketball seasons.

Unlike most athletic groups, however, they have no leader. The team functions as a democracy; everyone’s suggestion counts and all skill levels are encouraged to participate.

After a year of planning, the LU Dance and Cheer Team has become a permanent addition to Lawrence’s football and basketball seasons.