The Chairs presents a “novel” experience 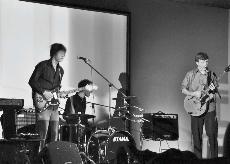 Like Pink Floyd’s famous laser concerts of past, Lawrence’s own The Chairs created a multimedia experience for its CD release show in the cinema last Saturday night.
The band played on a stage placed in front of a screen, which cycled through colorful, patterned images, providing an excellent backdrop for most of its songs. As the band played some of the darker, harder material from its new album, “Nine Ways,” the screen changed to a dramatic red color that bathed the band in an eerie red light.
In addition to providing a great visual counterpart to their performance, the Chairs released its new album in the form of a hardcover book. Though this form of release sounds confusing, the design is quite innovative: Designer Marky Hladish created artwork for nine different book jackets and put them on a variety of used hardcover books, adding a page at the beginning with the liner notes to the album and a paper CD case. Impersonal, dull, compressed MP3 files, meet your match.
All of these elements of the show made it truly unique and personal, but it would have been worthless had The Chairs not backed it up with good music. Even though keyboard player Eric Klosterman had to cover both bass and keyboard parts, the Chairs’ set mimicked its CD design: innovative, well-presented, clever and interesting to look at, as well as listen to.
Because they played songs ranging from their first EP to the new album, the night showcased their growth as songwriters and musicians. Earlier songs “Dark Clothes” and “Polly” sounded much tighter and more rhythmic than they ever did a year ago, and the new songs from “Nine Ways” stood out as more crafted and carefully arranged.
Guitarist Phil Kronenberg’s playing mirrored this growth: The weird space sounds and wall of sound effects he uses sounded more controlled and fit with the songs better than ever. His guitar sounds combined with Klosterman’s keyboard playing provided a beautifully cacophonous opening to fan favorite “This Isn’t A Fire Fortress.”
Despite the cinema seating, most of the crowd got up between the aisles to dance during “Fire Fortress” and “If You Were A Murderer,” a testament to the band’s pop sensibilities.
One standout from the night was the slow-burning builder “Biggest Fan,” a track that juxtaposed earnestly-sung lyrics about a stalker with beautiful chord changes and guitar playing.
Schaaf seems to like these sorts of juxtapositions, as many of the band’s other songs combine slightly dark lyrics with great keyboard, guitar and vocal hooks that make them much more interesting to listen to than dark lyrics and somber playing.
The band closed with “Charlotte Pipe,” a new, upbeat tune that blended power pop keyboard hooks with fuzzed-out punk guitar and a thundering drum part. Adding some humility to the night, Schaaf jokingly described the tune as the band’s “radio single if they ever got on the radio.”
With its quirky pop sensibilities, interesting, varied songwriting and clever juxtapositions, The Chairs is truly carving out its own niche in the realm of music, a welcome change from many of the bands that actually are on the radio today. 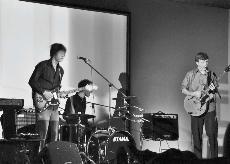