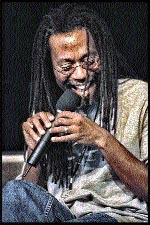 A sold-out audience was impressed by BobbyMcFerrin&s performance Friday.

Bobby McFerrin gave a highly energetic performance on Friday night of Jazz Weekend.The Lawrence University Jazz Ensemble (LUJE) warmed up the crowd with a Fred Sturm arrangement of the Thelonious Monk tune “Straight, No Chaser.” This modern spin on a classic blues tune had unexpected twists that made a strong lead in to the Jazz Singers’ set.

The singers performed three songs that included a fantastic performance of Mr. Rogers tunes arranged by Jonathon Roberts, a delicate arrangement of “Lonely Woman” by Ali Losik, and the classic Beatles song “Ticket to Ride.”

After this introduction of talent at Lawrence, McFerrin took the stage, joining both LUJE and the Jazz Singers with a McFerrin original entitled “My Better Half.” It was an uplifting R&B tune that was very catchy to the listener’s ears.

Next, LUJE and McFerrin performed another Fred Sturm arrangement, this time of Van Morrison’s “Moon Dance.” This brisk cool tune put the audience at ease.

The Jazz Singers joined LUJE and McFerrin again for “Freedom is a Voice.” McFerrin chose this tune in response the Sept. 11 tragedy, as it showed the value of freedom and coming together for the common good. It was evident to the listener that McFerrin was emotionally attached to this piece.

McFerrin closed out the first half of the concert with an energetic series of improvised song and comedy, which included audience participation on pieces everyone could enjoy. He touched on everything from “The Itsy Bitsy Spider,” to singing “Happy Birthday” to a set of 10 year old triplets, to a complete musical summary of “The Wizard of Oz.” Equally impressive was his performance of Bach’s “Air on a G String,” sung with the audience singing “Ave Maria” on top.

McFerrin’s demonstrated his talent to not only reach on the utmost extremes in register of the human voice, but also to showcase some of his own unique abilities with his vocal chords, such as harmonizing with his own voice.

The audience response to McFerrin’s performance in the first half was astonishing-had he not come back out from offstage to remind the audience that there was a second half, the applause may have gone on endlessly.

Lawrence’s own Dane Richeson (head of the percussion studio), along with student Mike Pfaff, provided an interesting change of pace with McFerrin for the opening of the second half. An fascinating combination of the Brazilian berimbau and African gyil provided an exciting color for McFerrin to improvise over.

McFerrin then performed a duet with Chris Salerno on piano, on the hit Antonio Carlos Jobin tune, “Girl from Ipanema.” The performance of this classic tune was highly enjoyable.

Lawrence’s Matt Turner performed an improvisatory jam with McFerrin, which seemed to hold a bit of a Jimi Hendrix influence, particularly with the screaming high notes that he played on his cello. The piece was both creative and exciting.

Members of the Lawrence University Percussion Ensemble joined McFerrin and the Jazz Singers for the next piece, entitled “Kid’s Toys.” This light, sensitive piece provided a nice contrast to what had already been played. A blend of pop and world rhythms held this piece together in a fun way.

The final piece on the program brought the Jazz Singers and LUJE together on the John and Chris Salerno arrangement of the McFerrin original, “Jubilee.” This feel-good closer left the audience in high-spirits.

Overall the concert was quite enjoyable, and McFerrin blended nicely not only with the musicians on stage, but also with every member of the audience. Through his improvisations, as well as his planned pieces, McFerrin combined fun, creativity, and beauty.