Uri Caine illustrates that jazz is not dead to Chapel crowd 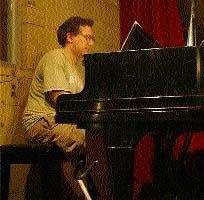 Uri Caine proves Jazz is far from being dead.While certain recent PBS documentaries may subtly suggest that the art form of jazz has been at a veritable standstill since the days of Charlie Parker, pianist/arranger/composer Caine is a perfect counterexample of this erroneous opinion. Caine’s performance with LUJE and small ensembles last Saturday night highlighted not only the pianist’s talents as a straight-ahead jazzman, but also his imaginative—and innovative—attitude and spirit.

After opening the concert, LUJE was joined by Caine for the Matt Turner arrangement of John Harmon’s “Half a Bubble Off,” Turner’s own “Send Off,” and jazz standard “Just Friends.” Caine’s appearance on the former two pieces held particular honor, as both composers are alumni and current faculty of Lawrence.

The second half of the concert began with some of Caine’s solo piano work. Just as the applause for the first piece, ballad “Honeysuckle Rose,” had begun, Caine dramatically launched into a moving “New York, New York,” demonstrating virtuosi technique, keen sensitivity, and intense originality. Standard sounds were soon interrupted by sparkling patches of pop balladry, hardcore gospel-blues, and violent twentieth century avant-garde, forever keeping the audience on its feet, patiently awaiting the next twist. This tribute to the Sept. 11 attack not only held as a poignant reminder of the times, but it also served as a wonderful preview to the mastery and integration of multiple styles that has become the signature of Uri Caine.

Caine concluded the solo portion of the concert with another standard, “Green Dolphin Street,” after which he was joined by percussion instructor Dane Richeson (drums) and Jeff Eckles (bass) to perform a very surprising arrangement of the fourth movement of Mahler’s Fifth symphony. Beginning true to the original Mahler theme, the trio soon broke out into an unrecognizable medium-up tempo swing, containing only shades of the original theme. Some may call it bastardization; others may call it innovation. Regardless, it is impossible to deny that Caine’s re-imaginings are a unique step beyond the norms of both classical and jazz.

Indeed, merging the two often-rivaling art forms has never been accomplished with such grace and ease as Caine proceeded to exhibit in his adaptation of Bach’s “Goldberg Variations.” This collection of highlights from Caine’s album of the same name was by far the gem of the evening. In addition to the assistance of Richeson and Eckles, Lawrence faculty members Bob Levy (trumpet) and Matt Turner (cello), as well as alumna Lisa Rhoades (clarinet/saxophone) and the L.U. Jazz Singers joined Caine upon the stage for an unconventional dose of Bach.

In Caine’s explanation of his arrangements, there was a strong sense of reinventing the classic by way of the modern. By integrating current/folk musical elements and styles into the traditional, listeners could gain a whole new understanding of what the music meant to the Baroque audience, as well as themselves. For example, Caine would take a traditional Bach hymn and give it a Southern-Gospel flavor, as in the “Nobody Knows Variation.” A gigue (a Baroque dance) became a mambo or tango. “The Stomp Variation” was complete solo ragtime stride piano, while “The Hot Six Variation” traveled to a New Orleans’ speakeasy for inspiration. Especially delightful was the “Luther’s Nightmare Variation”—a full-blown Klezmer rendering of one of Bach’s Lutheran hymns.

Naturally, some of Caine’s interpretations retain their traditional baroque style, while others delve into bebop, blues, free-jazz, avant-guard, contemporary, choral, novelty, Latin, and even (though not performed on Saturday’s concert) electronica. Caine infuses these styles into his music in a way that transcends categorization, proving that the face of jazz, as well as the face of music itself, is indeed still growing after all these years.