SOUP and potential in campus programming

Homecoming, one of the activities organized by SOUP, brought creative games to encourage spirit.
Devin Burke 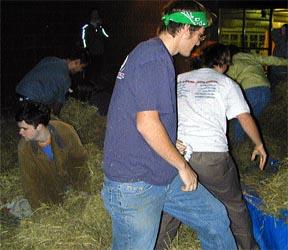 Homecoming, one of the activities organized by SOUP, brought creative games to encourage spirit. (Ryan Marx)

As of third term this year, the Student Organization for University Programming, or SOUP, will mark its second year in existence. The organization has been under criticism since its beginning. Some of that criticism stems from SOUP’s place on campus as an influential organization with a large budget, but without enough experience to have fully worked out its role. SOUP was born out of a consolidation of campus programming groups, the two major groups being the Campus Events Committee and the University Events Committee. These groups at the time were both fulfilling some of the same needs and sometimes conflicting with each other, so SOUP was born to ease programming conflicts.

The distinction between SOUP’s dual roles, according to Blanchard, is that SOUP is a student organization whose purpose is more general than other organizations, and included in its broad intentions is the goal to help other organizations program their events. Because of these campus-wide goals and the way that SOUP was formed, it maintains its dual relationship with LUCC. This relationship, says Blanchard, is one that SOUP is trying to “approach more intentionally.” Right now, she says, SOUP is in the “formation stage in figuring out its role with LUCC.”

Beyond those three events, SOUP’s intention is to provide help or entirely organize educational and entertainment events through a combination of funding and planning, although the balance of education and entertainment programming is still one aspect that is not agreed upon within SOUP itself.

Also of importance is the way that SOUP’s resources are available for campus organizations seeking co-sponsorship of an event. One drawback, however, is that SOUP plans its event calendar for the entire year at the end of the preceding academic year. This practice does not match up with most student groups’ planning, and so few groups have yet to approach SOUP about co-sponsoring in time for SOUP to contribute much funding.

The reason SOUP’s planning calendar focuses on the schedule of the National Association for Campus Activities (NACA) conference is that the bulk of SOUP programming comes from this event. Every year around March, NACA holds a conference where campus programming organizations can audition book performers for nearly a third of their typical prices, according to Blanchard. While SOUP does not spend all of its budget at NACA, a major portion at this point is used to book these events. For this year, 25 events were scheduled at last year’s conference, which lays out most of the year’s 42-event calendar.

The best way for students to approach SOUP about getting support or giving ideas for campus programming, according to SOUP member Meaghan Harvey, would be to attend meetings. SOUP meets every week on Tuesday nights at 8 p.m. in the LUCC conference room. Students can “suggest ideas… and now is a good time,” says Harvey.

For students wondering whether they should approach LUCC or SOUP about getting funding, the decision depends on the timing of the proposal and the nature of the request. SOUP has significantly less money available after the NACA conference, and so requests before that time will be much more successful. Also, for events that have a limited appeal, LUCC would be a better first option, since SOUP’s goal is to provide event programming with more of a campus-wide appeal.

In addition, SOUP is in charge of the Alyssa Paul Maria Fund, a fund that “was established to support innovative and exciting programming initiatives,” according to its statement of intention. The fund is based on interest gained from stocks, and currently the fund for this year is around $3200. The fund is allocated on a nearly first come, first serve basis, after SOUP members review each application. The money is doled out with the intention that it will be given out bit by bit all year.

Harvey points out, however, that “SOUP doesn’t want to just give money. Facilitation doesn’t mean fully funding.” SOUP has more resources than LUCC in terms of knowledge of facilities and the availability of venues on campus. Also, publicity and other event-related services fall under SOUP’s intended services.

Over the last year, SOUP has made a more concerted effort to solicit student input. Last year, they sent out a survey to gauge campus interest in particular types of entertainment. They did not, however, prepare the survey in time for the NACA conference. At the most recent LUCC meeting, SOUP was denied a request for extra funding to book more student-requested events, partly because LUCC felt they should have incorporated the survey results into their NACA scheduling. This year, students will have more of an opportunity to express what types of acts they like to see and request specific acts from NACA or elsewhere.

According to Andrea Hendrickson, also a SOUP member, one main intent of the next year is to present more student performers.

Many students have requested that SOUP make more use of the on-cmapus talent, and that is a goal stated by all the members of the organization that spoke for this article. It is also the intent of the Alyssa Paul Maria Fund.