Peace Project presents a new way to give back abroad

Yasmine with children in Kingston, Jamaica, as part of the Peace Project.
Devin Burke 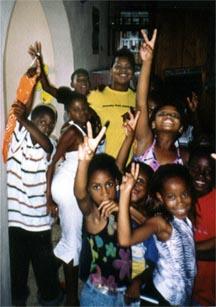 Yasmine with children in Kingston, Jamaica, as part of the Peace Project. (Luke Fischer)

With the help of a grant from the Lawrence University Class of 1968 Peace and Social Activism Project Fund, sophomore Yasmine Rainford organized a curriculum and a trip for herself and five other college students to Jamaica to teach children in Kingston. The curriculum, which she adapted from the Peace by Peace Project at Yale, sought to teach non-violent conflict resolution and improve problem-solving skills through close contact with volunteer teachers. Yasmine hopes that this project will become an annual project each summer. She will present about her trip and her intentions for next summer on Dec. 1, at 3 pm in Wriston auditorium. The strong political climate in Jamaica led to a conflict that shut the country down this summer, two weeks before Rainford’s program, which was called the Peace Project, began. Gunmen shot at policemen, and the political fight was between the People’s National Party, and the Jamaica Labor Party. Rainford says that people were in danger of being shot if they were in the wrong neighborhood. During the project, one of the student’s father was killed, and gunshots would be heard during the day.

The program was divided into two one-week sessions that took place between Aug. 7 and Aug. 17. Rainford arrived a month before and began to make preparations. The schoolroom that they used was converted from a bar that had been closed for a year and a half, requiring a complete clean up and refurnishing. When the program began, only a few students came but after word of mouth spread, they accepted a total of over 80 children. Although the intended ages were 7-12, kids ages 5-15 came.

The volunteer teachers brought gifts and other items from America. Beth Haines, associate professor of psychology at Lawrence and the project’s faculty advisor, sent teddy bears for the children. For the kids, the program was free, and food was provided. Many of the parents helped out with teaching and making food.

Rainford, who lives in Jamaica, stayed with her family, who were the on-site managers of the project. Luke Fischer, a junior from Appleton, stayed with Rainford. All the other volunteer student teachers were international sudents who lived in Jamaica. Thanks to the grant, all or nearly all transportation and meal costs were covered. Scott Fuller, International Student Advisor, also contributed to costs.

Next summer, Rainford hopes to go back to expand the program, possibly by beginning to teach literacy or bringing computers to the area. “I think we made a start,” she says, “and I pray that with God’s help we can bring it to a situation that’s better. 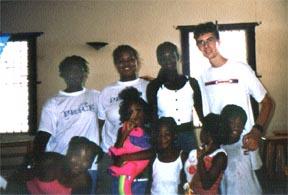