Wrapped up in books 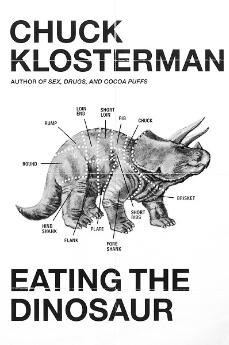 I read Chuck Klosterman’s Sex, Drugs, and Cocoa Puffs” my freshman year of high school with a mocha frappuccino in one hand and a pile of astrology books at my feet. In the book, Klosterman writes about things that were relevant to me at the time, such as “emo,” that strange sub-genre of music. The problem, though, was that nobody my age was talking about these insights that Klosterman had made into our culture.
In his most recent collection of essays, “Eating the Dinosaur” Klosterman hits the mark yet again, writing a little bit about ABBA, sports, road movies and Nirvana. On the surface, all these things might seem a little boring or at least passé, but they have left an indelible mark on the way that we think about entertainment now, even if we hadn’t really drawn the connections before. It also doesn’t hurt that Klosterman writes in a comfortably conversational style, which made it possible for even me to understand obscure football rules.
The review of this collection of essays in some sense has to be cryptic. The back cover hints at the larger theme by asking the question, “What is reality?” But it doesn’t tell us what reality is. It questions whether or not we can or want to believe that celebrities are who we say they are. Does a basketball star’s performance matter more than the hype surrounding his ascent?
As a culture, we often get into arguments about things like Lady Gaga. Who is she? What is she making fun of? Can we look at her as a human, separate from her musical output or the meat dresses she wears?
I don’t really know the answers to those questions, but Chuck Klosterman helps answer the question by writing that “she is making herself famous for making herself less substantial than her work warrants.” My version of that same argument had something to with Lady Gaga making herself relevant by making herself relevant, if that makes sense.
Garth Brooks doesn’t really matter anymore, and we don’t remember that he had a period in which he went by Chris Gaines. He released an album under that name to see if it would garner as much attention, to see if Brooks’ name and not his music was the cause of his commercial success.
This scenario is a little bit like Beyoncé, ‘s Sasha Fierce. Beyoncé wanted to try something slightly different so she slapped an extra name onto her album – not in the hope of fooling anyone, but in the hope of arriving at a more authentic representation of herself.
In a time when it is difficult to separate the surface of a person or cultural product from the substance, Klosterman provides us with an extended look at why we even bother trying.
In his last essay, he partially blames the Internet and other technology for the confusion we feel. An image on a screen is just as real to our brains as that very image before our eyes. In our memories, we won’t be able to tell the difference. So which one is the real one? And at what point does it stop mattering to us as consumers of popular culture?