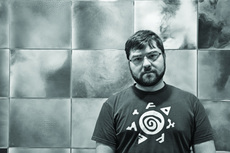 Jake Crowe has played saxophone in about every possible ensemble at Lawrence. From the Jazz Ensemble to the LSO, he’s done it all. But saxophone wasn’t how Crowe entered the music world.
His first real interest in music began in the fifth grade when he performed in a musical version of Hansel and Gretel. Musical theatre was Crowe’s passion for a long time.
“When I got to high school, I was pretty sure that musical theatre was what I wanted to do,” he explained. “But then I started playing jazz, and then I got excited about the idea of playing my saxophone for a living.”
Crowe, an Appleton native, started to learn saxophone in eighth grade and has used it as his “voice” ever since. But it’s not the only instrument he plays. Crowe began learning guitar in sixth grade – and at the same time, he and his friends started a garage band named Little Play Thing. The band still exists today and plays covers of ’90s rock music at many local bars. Crowe is the lead singer and plays guitar and saxophone in the group.
But that doesn’t cover all of the instruments Crowe has studied. He has also taken lessons on string bass. Crowe enjoys getting several perspectives on music by working with many different teachers.
Last winter, Crowe and other members of the Lawrence University Jazz Ensemble performed with Bobby McFerrin as a part of the Jazz Series. Crowe had to learn piccolo and flute and pick up the clarinet again. Despite these challenges, it remains his favorite moment at Lawrence.
“It was really rewarding because I put a lot of work into it,” Crowe recalled. “When Bobby came in, it was breathtaking. He is such an amazing performer, and we had worked so hard to be a good enough band for him.”
Just as McFerrin inspired Crowe, Crowe has inspired his three younger brothers to get involved in music. They are all musicians in the area and are all involved in other forms of art, too. Crowe really values his musical community that includes both family and friends.
This fifth-year saxophone performance and music education major is giving his senior recital Saturday, Jan. 22 at 5 p.m. in Harper Hall. Crowe will be playing everything from stereotypical classical saxophone music to jazz.
“It’s a variety of sounds,” he said of his recital program. “Every piece has a different instrumentation, so there will be a variety of timbres. I think it’s important to keep it sonically interesting. I definitely think it will keep people interested with a mix of exciting and relaxing music. Plenty of tension and release.”
After finishing his student teaching next winter, Crowe plans to stay in the area and take a break from school, both as a student and a teacher. He wants to do some traveling and perform with old friends who live across the country. Clearly, he is suited to play a number of instruments in a variety of venues.