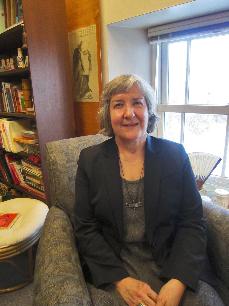 Associate Professor of Chinese Jane Parish Yang has been teaching at Lawrence since 1991. Yang earned a doctorate in Chinese Literature from the University of Wisconsin-Madison and attended the University of Iowa for her graduate degree in Asian Studies. After earning her doctorate, she taught at Colby College, Oberlin College and UW-Milwaukee. Now, Yang is Associate Professor of Chinese at Lawrence with an emphasis in East Asian languages and cultures.
Maccoux: What drew you to choose teaching as your career choice?
Yang: That’s a good question. I guess once you finish a Ph.D., there aren’t a lot of options. Actually, after I got my B.A. from Grinnell College, there was a travel-service scholarship that enabled me to go to Hong Kong for a year. There, I taught English as well as American literature. It was a roundabout path to an academic career. I guess you could say I fell into it because of Hong Kong. After my year there, I traveled to India, Iran, Greece and other places in Europe. When I went home, I began studying Chinese in graduate school. It wasn’t something I had originally planned.
TM: From reading your profile, I understand that you have a particular interest in East Asian literature.
JY: I teach language, literature and translation here. Because I started out with American studies and literature, East Asian literature has a special interest for me. Also, I try to change the curriculum and the films I teach every once in a while to keep everything interesting. I love reading Lu Xun, one of the first vernacular short story writers in China, and teaching about the Tang dynasty from the seventh to 10th centuries. I get very enthusiastic when my students get excited about any literature.
TM: With that in mind, why did you decide to translate “Tall One and Short One: Children’s Stories”?
JY: Well, these are stories my husband wrote about our daughter growing up. They are about when she was three, four and five years old. He wrote these stories in Chinese, and then I translated them into English. My husband teaches philosophy for children in Taiwan, so these stories incorporate a lot of philosophical points and ask fundamental questions.
TM: Tell me about your accomplishments in promoting knowledge about East Asian studies at Lawrence.
JY: Back in 1997 to 1999, I was successful in getting a government grant that has allowed students to have field experience in Asia. With the National Security Education Program, students could do internships at businesses in China. It was a three-year demonstration grant to see if students with advanced Chinese at liberal arts institutions could work in businesses in China, and they could. Also, I was co-director for the $1.5 million Freeman Foundation grant that Professor Claudena Skran and I wrote to enhance East Asian studies at Lawrence from 2001 to 2005. The grant supported study tours for students and faculty to go to Asia to experience the culture on the ground. It was a really exciting experience to take all of them there and introduce them to the great places of East Asian civilization. I would say that getting those grants and giving those opportunities was my greatest achievement.
TM: What would you say are the greatest rewards and challenges of being a college professor?
JY: Being in the type of community that values insight and intellect and getting paid for it is a privilege and the best benefit of my job. I would say the biggest challenges for professors are the demands on our time. Students may think we only teach a few classes, but we also are chairs, have one-on-one tutorials, help seniors with their independent projects or have advising duties. These demands can be very stressful sometimes.
TM: Do you have a favorite class to teach?
JY: Because I teach both language and literature, I don’t really have a favorite. In language, I get students with zero background in Chinese and by third term they can read and understand Chinese children’s stories. That’s thrilling because they started in September at zero. In literature, I love seeing my students get excited about East Asian cultures. To have them read 1,000 or 2,000-year-old literary works and be interested is very rewarding for me.
TM: What is your favorite thing about Lawrence University?
JY: I love the fact that we have a conservatory as well as a college. That was something very unique when I was teaching at Oberlin. Having the opportunity to come to a place with a conservatory and that kind of environment was a big attraction for me.
TM: What do you do on your free time when you’re outside the classroom?
JY: I love Western opera and Chinese opera. Unfortunately, there are not any Chinese operas in Wisconsin, but I still go to Milwaukee operas three times a year. When I was on sabbatical a while back, Professor Ternes was teaching Italian, so I audited that course twice because I was interested in opera in Italian. I also love to swim, and when the swimming team is not in the pool, I’ll be there. For eight months I would walk to school, swim, go home, change and come back to teach. Also, it took me 10 years, but I am now a Packers fan. Thanks to Professor Beth Haines from the psychology department, I’ve actually gone to five of the games including the Snow Bowl and the Ice Bowl in 2008. It’s fun to get caught up in all of the Packers excitement.