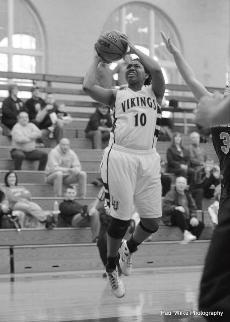 The Lawrence women’s basketball team suffered a frustrating 58-50 home loss at the hands of the Beloit College Buccaneers Saturday afternoon, then lost 75-53 at Carroll University Tuesday night.
The game against Beloit was characterized by series of double-digit runs for both sides. After the Vikings scored the first five points of the game, the Buccaneers (3-7, 1-4 MWC) countered with a 10-point run of their own.
With just over five minutes left in the first half, Lawrence had put together a 10-2 run to build a 20-16 lead, but the Vikings were outscored 13-3 over the remaining 4:49 giving Beloit a 29-23 lead at half.
The game broke open midway through the second half, when Beloit went on a 14-4 run to pull out to a 51-34 lead with just over eight minutes left in the game. The Vikings’ Cathy Kaye led a charge to narrow that margin, scoring five points down the stretch to trim Beloit’s lead to 56-45 with one minute left.
Nakita Chadwick converted a lay-up after a missed free throw by Beloit, and Alex Deshler drained a three-pointer to cut the Beloit lead to 56-50 with just 30 seconds left.
However, a combination of accurate free-throw shooting by Beloit and a Vikings turnover kept the game out of reach, sending Lawrence to their fifth conference loss this season.
The Vikings next set out for a three-game, five-day road trip, beginning with a matchup against Carroll University on Tuesday night. Unfortunately for coach Dennis Nagan’s team, their bad luck continued, as Carroll stretched a seven-point lead into a 75-53 win in the final 12 minutes of the game.
The game began well for Lawrence, as conference title contender Carroll (8-3, 4-2 MWC) was only up 35-29 at the half thanks to a block by senior Kanesha Walker at the end of the period. The Vikings kept the Pioneers close until a layup by Carroll’s Megan Turckes sparked her team’s defense to shut down Lawrence, who would be outscored 26-11 in the final eight minutes.
With the loss to Carroll, the Vikings’ losing streak reached 13, while their conference losing streak now sits at 48, stretching back to a 63-52 win over Knox in January 2008. However, the streak could easily end Friday, when the Vikings will travel to Grinnell College (2-7, 1-5 MWC) to face off against a Pioneers team that has been struggling in recent games.
The Vikings (0-11, 0-6 MWC) will look to get their first win of the season as they finish their road trip at Grinnell and at Monmouth College Saturday.