Founder of freshman studies passes away at 94 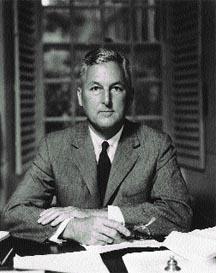 Nathan Marsh Pusey, who served as president of Lawrence University from 1944-53, leaving to become president of Harvard University, died early on Nov. 14 in New York City. He was 94.Pusey was named Lawrence’s tenth president in the spring of 1944. Prior to becoming president of Lawrence, Pusey taught history and literature at Scripps College and spent four years as an associate professor of classics at Wesleyan University.

Known for his strong teaching skills, Pusey took a keen interest in the college’s curriculum and at the beginning of the second year of his presidency, introduced freshman studies to the Lawrence curriculum. The course is still taught relatively unchanged from the way Pusey introduced it: emphasizing the discussion of ideas through the study of classic works of literature, art, and music.

“Nathan Pusey’s impact on American education, including his presidency of Harvard, was immense. But I believe his deepest academic love was always Lawrence University,” said William Chaney, professor emeritus of history at Lawrence, who , in 1952, Pusey hired. “His concern for the individual student, for the life of the mind, and for high standards helped make Lawrence what it is today. And he was integrity personified.”

Former Lawrence professor of history Charles Breunig, who chronicled the history of Lawrence in his 1994 book, A Great and Good Work, titled his chapter on Pusey’s presidency as “The Faculty’s President.”

“He was certainly one of Lawrence’s outstanding presidents in the 20th century,” said Breunig. “He was considered a president that was particularly close to the faculty. Having taught for several years himself, he was aware of the problems facing higher education and understood the faculty point of view better than some of the others.”

During his presidency, Pusey took a strong stand against U.S. Senator and Appleton native Joseph McCarthy’s anti-communist crusade, defending academic freedom by refusing to ban The Communist Manifesto from the curriculum. When Pusey’s appointment as president of Harvard was announced, McCarthy remarked, “Harvard’s loss is Wisconsin’s gain.” The attack on Pusey undermined McCarthy’s credibility in the Fox Valley among many of his corporate supporters.

The June 1, 1953 announcement that Pusey was Harvard’s choice as its next president brought reporters from Life and Time magazines to Appleton. Upon hearing the news, a crowd of students and faculty gathered in front of the president’s office with lighted torches and serenaded the Puseys.

After leaving Lawrence, Pusey served as president of Harvard from 1953 to 1971. During the turbulent 1960s, he called for an end to campus turmoil and violence, complaining that on many campuses “learning has almost ceased,” because of the violent, revolutionary activities of a “small group of overeager young…who feel they have a special calling to redeem society.”

Born in 1907 in Council Bluffs, Iowa, Pusey graduated from Harvard in 1928 and earned his Ph.D. in ancient history at Harvard in 1937.

In 1987, the Nathan M. Pusey Chair in East Asian Studies was established at Lawrence to honor the legacy he left behind in freshman studies, and to reflect his keen interest and involvement with the countries and peoples of that part of the world.

He is survived by his wife, Anne Woodward Pusey, two sons, Nathan Pusey Jr., a 1959 Lawrence graduate, and James Pusey, and a daughter, Rosemary Hopkins.