Swim team off to impressive start 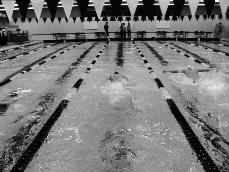 Five meets into their season, Lawrence University’s swimming and diving team has racked up a very impressive record. In their six matches, the men stand at 5-1 while the women have compiled a 4-2 record.
The season began Oct. 23 with a convincing pair of wins over Beloit. The 130.5-50.5 win for the Lawrence men was actually closer than the women’s competition, which finished 142-59 in the Vikings’ favor. The dominance was especially apparent in the relays – in all four relays contested in the meet, Lawrence’s “A” and “B” teams finished first and second, while Beloit finished third.
However, the momentum from the dual meet against Beloit failed to carry over into the Vikings’ matchup with regional powerhouse UW-Whitewater. The undefeated Warhawks won both team competitions handily, though a few Lawrence swimmers added to their success by winning an event for the second time in two meets.
In the men’s 200-yard medley relay, the Lawrence “A” and “B” teams finished in first and second for the second consecutive meet with times of 1:41.82 and 1:51.92 respectively ahead of a 1:59.78 time from UW-Whitewater. Peter Brengel, who swam the first leg for the “A” team in the relays, also repeated his win in the 100-yard backstroke with a time of 54.73 seconds, which was the only time under one minute recorded by the event’s five swimmers.
Also of particular note was freshman Hannah Gabriel’s debut in the freestyle events. Gabriel, who won the 200-yard and 500-yard freestyle against Beloit, also won both events against the tougher UW-Whitewater competition. As Gabriel swam a leg of the Vikings’ winning 200-yard freestyle relay in both meets, her wins against UW-Whitewater brought her total to six wins in two meets.
For her performance in those two meets, Gabriel was named Midwest Conference Swimmer of the Week. For Gabriel, a graduate of York Community High School in Elmhurst, Ill., the award came in the first week of her freshman season.
Gabriel also won two events and a relay in Lawrence’s next dual meet, a Nov. 13 sweep of UW-River Falls. Joining Gabriel in the double-win club for the meet were Brengel, including his third win in the 100-yard backstroke; freshman Evan Flack, who won the 100-yard and 200-yard freestyle events; and senior Cory Greguske, who won the 1-meter and 3-meter diving events.
In their first triangular of the year, the Vikings hosted Marquette University and Ripon College, winning both matches on both sides of the competition. The only close score in the triangular was the women’s match against Marquette, which Lawrence won 120-77.
Flack won a pair of events for the second consecutive meet, winning the 100-yard freestyle with a time of 50.13 seconds and the 200-yard freestyle in 1:52.75. Cameron Gmehlin and Julia Heller also won two events each, with Gmehlin winning the 200 individual medley and the 100 breaststroke. Heller won the 200-yard freestyle in 2:07.13 and the 100-yard backstroke with a time of 1:09.19.
In their last dual meet of fall term, the Lawrence University Swim Team split with UW-Oshkosh. Both sides of the competition were close, with the men winning 120-113 while the women lost 124-107.
Multiple winners for the Viking men’s team included Brengel, who won the 50-yard and 100-yard freestyle, and the relay team, which won both the 200-yard freestyle relay and the 200-yard medley relay.
On the women’s side, Gabriel once again won the 200-yard and 500-yard freestyle, while freshman Helen Noble missed out on a win in the 100-yard backstroke by a miniscule .12 seconds.
Heading into this weekend’s University of Chicago Invitational, the Vikings have racked up an impressive record, but the swimmers’ eyes are on the Midwest Conference Championships, which will be held Feb. 18-20 at Grinnell College.