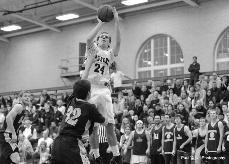 Lawrence’s men’s basketball team took an undefeated conference record into last Saturday’s game against Beloit, but the Vikings’ easy 63-42 defeat of the Buccaneers was overshadowed by Tuesday’s 81-79 loss to the Carroll Pioneers.
In the home matchup against Beloit (3-8, 2-4 MWC), the then-undefeated Vikings fell behind 15-10 after the first 10 minutes of play, but quickly grabbed the lead and never gave it back. The score stood at 31-24 at halftime, but the Lawrence defense shut down the Buccaneers in the second half.
Beloit was outscored 32-18 in the second half, including a 12-2 deficit in points scored in the paint. While Lawrence shot 52.6 percent in the second half, Beloit shot 6-25 for a meager 24 percent shooting – missing as many shots as the Vikings even attempted in the half.
Erik Borresen contributed his now-usual double-double with 17 points and 10 rebounds, while sophomore Conor Klusendorf contributed 10 points, eight rebounds, and two steals on 71.4 percent shooting.
Coming off of the victory, the Vikings’ record stood at 5-0 in conference play. While the Vikings’ five victories had mostly come against the weakest teams in the conference, their Dec. 3 win against Illinois College (9-2, 5-1 MWC) was cause to celebrate as it was a 21-point win over one of the strongest teams in the conference.
However, Lawrence’s hopes of a perfect conference record were dashed in last Tuesday’s 81-79 loss to Carroll.
The game began well, with the Vikings holding on to a 38-33 lead at halftime in Waukesha. Carroll (5-6, 3-3 MWC) took until the 10:50 mark in the second half to tie the game at 51, but Lawrence responding by building a 66-56 lead with just under seven minutes left to play.
Carroll answered, retying the game 71-71 with three minutes left and taking a 77-72 lead in the final minute, but senior Jon Mays made a quick layup off of a Vikings timeout to bring the game within one possession.
A steal by freshman Brian Gryszkiewicz gave the Vikings the ball with a chance to tie, but two crucial missed free throws by Borresen let the Pioneers put the game out of reach, and Gryszkiewicz and Mays’s field goals as the clock ran down were not enough to keep the Vikings’ record unblemished.
In the 81-79 loss, Borresen notched 20 points and grabbed 10 rebounds, while Mays shot 11-20 for 25 points. Despite shooting a respectable 49.2 percent from the field, Lawrence (6-5, 5-1 MWC) were outshot by Carroll and dropped into a three-way tie for first in the conference with Illinois College and Ripon.
The Vikings will attempt to regain their winning ways this weekend, when they will travel to face Grinnell College and Monmouth College.