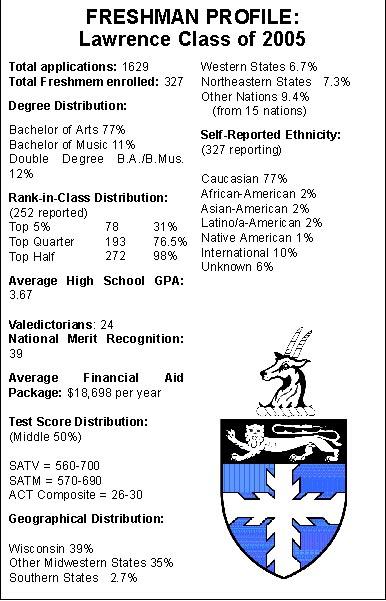 Syverson did, however, give examples of some changes within the University that have likely increased prospective students and enrollment. He explained that the expansion of the conservatory, for example, has caused a significant increase in the number of students enrolled in music. In 1983, there were approximately forty new students admitted into the conservatory. This year between 80 and 95 students were admitted, about half of which are students seeking double degrees.

The construction of the new buildings has also changed the academic interests of students. Syverson stated that the incoming freshman class this year had a five percent increase in students interested in science, which he feels is at least partially attributable to the completion of Science Hall.

Syverson then spoke about the methods of recruitment that the University uses and how these methods have changed. Domestically, representatives from Lawrence annually attend 150-200 College Fair programs and visit between 300 and 500 high schools. The Midwest region is the primary focus of these visits, but they extend nationwide. Recently, Lawrence has added regional representatives in Minneapolis and Chicago. He feels that this has made Lawrence’s presence more comparable to regional schools in those particular areas.

Syverson noted that the Southeast is the only region that does not receive much focus, because typically few students from those areas attend Lawrence. Previous recruitment efforts in that area failed to produce increased enrollment from the region.

Lawrence also uses mailings to help attract and inform prospective students. Syverson explained that the University purchases names from lists of students who took the PSAT. Annually, Lawrence buys 60,000-70,000 names of high school juniors and 20,000-30,000 names of high school sophomores. These names are then used for mailings and other correspondence. Besides direct purchase of names, Lawrence also has advertisements in certain magazines tailored specifically to advertise colleges to prospective students.

Recently, online communication has become more important in the recruitment process. Syverson noted that e-mail is increasingly useful when contacting prospective students, and that the Lawrence web site is useful for informing interested students without wasting paper. This is especially helpful for international students because Lawrence does not travel internationally with representatives and makes few international mailings.

Syverson noted that another advantage of the internet is the ability for students to apply online. He explained that it not only saves paper, but also is more convenient in many cases. For the current academic year, 375 applications were completed online. He feels that this gives students more freedom to chose what works best for them.

In order to be environmentally friendly and to determine what method prospective students prefer, Lawrence recently started a program that allows students to choose the way they wish to apply. It entails sending a simple postcard to students with choices to have a paper application sent, to apply online, or to be removed from Lawrence’s mailing list. He stated that this prevents wasting paper on people who have no interest in applying to Lawrence or who wish to apply online. Since the program was started this year, Lawrence has received about 2500 cards back.

All of these methods are part of the recruitment process, but Syverson feels the best way to attract students is for them to experience Lawrence firsthand. He stated that interacting with the faculty and students is the reason many students choose to apply to Lawrence. Syverson noted that he is “very proud of the student body” because of all the effort they extend to make prospective students welcome. He said that after they visit, many people are amazed at how friendly Lawrence students are.

One prospective student who visited last Friday, Kristin Riching, seemed to confirm this sentiment when she said, “One of the students was nice enough to eat lunch with me and discuss academic opportunities at Lawrence. The tour guide was also very informative and knowledgeable. 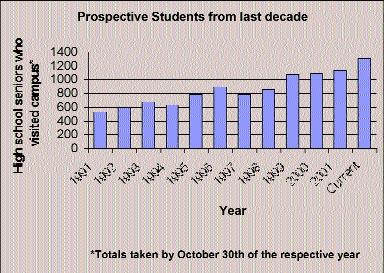 The chart above illustrates the increase in prospective visits over the past ten years.