A closeup of the anthrax spore.
Zach Eustis 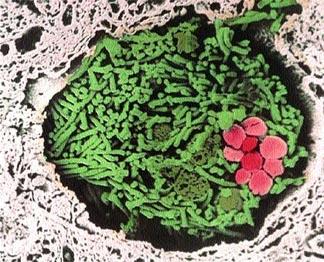 A closeup of the anthrax spore.

In response to numerous outbreaks of anthrax in the United States, the Biology Club recently sponsored a lecture by Professor Perreault dealing with the subject. The lecture, which took place on Thursday, Oct. 18, clarified common misconceptions about anthrax and offered advice for coping with the various incidents.Perreault began by discussing the necessity of checking the credentials of information sources. The anthrax attack is an emotionally packed issue with the public and people will leap to conclusions without checking the validity of their news sources. According to Perreault, this phenomenon is not limited to the general public.

Perreault cited an instance he observed: CNN citing CBS who had cited the Associated Press who had cited Dan Rather on a certain piece of crucial information. It was Perreault’s contention that since the information came from a credible news source, it was assumed that it must be true, and no one actually confirmed its legitimacy.

Perreault continued by discussing the origins of anthrax and more recent history of warfare, specifically referring to the Cold War era. During this era, the United States and the U.S.S.R. constructed many weapons of mass destruction as well as conducted many experiments with biological weapons. One of these weapons was anthrax.

Both the U.S. and U.S.S.R. were manufacturing anthrax until Richard Nixon and Soviet Premier Nikita Kruschev decided that this biological weapon was too terrible to continue its production. The U.S. destroyed all of its anthrax production facilities along with the vast majority of the anthrax spores, saving a small amount for future study. The samples were also stored for use in developing vaccines in case of an outbreak.

Next, Perreault discussed the spore itself. There are three types of anthrax. The first type, cutaneous, is found in the skin and stays there for the duration of the infection. This is the least deadly form, and accounts for almost ninety-five percent of all anthrax cases. The second type, pulmonary, is inhaled into the lungs and is considered to be the most deadly form of anthrax. The last type, intestinal, only occurs when a person absorbs some of the anthrax into his or her digestive tract. There has never been a documented case of intestinal anthrax in the United States.

The main reason anthrax in general is so dangerous is that it lingers in the soil for future organisms to pick up.

Perreault concluded his speech with a discussion of biological terrorists and some possibilities in dealing with them. Perreault stated that, “The terrorists are always going to get you in the first round because they planned this all along.”

Perreault, however, also believes that the reign of terror will be short lived. He stated the terrorists come, “they win a few rounds, and then they go.”

Perreault also recommended various methods of dealing with the attacks on a personal level. Perreault recommends the book Planning the Unthinkable, by Jessica Stern, for ways to deal with one’s own fears of biological attack.

Perreault said that the sudden rush of people to buy antibiotics is not a wise choice, saying, “Antibiotics will not fight the virus.” Instead, he goes on to say, the constant usage will help other viruses build up immunities to the antibiotics, which could result in further catastrophes.

Perreault concluded his lecture with an expression of his own hope for a resolution to this current dilemma: “Don’t let the bastards win.