Goodall with one of her famed chimps.
Ceilidh Mar 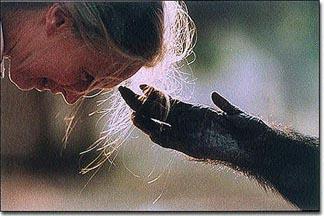 Goodall with one of her famed chimps.

Perhaps the most famous and influential anthropologist of our time, world-renowned social scientist Jane Goodall visited campus this Friday, and participated in a special program entitled, simply, “A Conversation with Jane Goodall.”Internationally acclaimed for her anthropological work with wild chimpanzees, Goodall’s work has earned her multiple awards and honorary degrees, and has led to the fulfillment of her childhood dream. Born in 1934 in London, England and raised in Bournemouth, Goodall showed an interest in animals from an early age. For her second birthday her father gave her a life-like toy chimpanzee. Family and friends warned her parents that the toy would be too scary for such a young child, but Goodall loved it. Her favorite childhood stories involved animals, and books like Tarzan and The Jungle Book were her constant companions.

While still young, Goodall spent a summer on a farm, learning about animals, and by the age of 11 was dreaming of living and working with them in Africa.

With the support of her family, Goodall worked her way through school and eventually got a job with a documentary film company. At the age of 23 a school friend invited Goodall on a trip to Kenya. While there, she heard that the world-renowned paleontologist and anthropologist Dr. Louis Leaky would soon be making a fossil hunting expedition, and after an appointment and interview, Leakey hired Goodall as assistant for his famous expedition to Olduvai Gorge.

Goodall’s appointment to the Leaky expedition had a huge impact on the rest of her career. On her website for The Jane Goodall Institute, she writes: “I always remember the first time I held in my hand the bone of a creature that had walked the earth millions of years before. I had dug it up myself. A feeling of awe crept over me. I thought, ‘Once this creature stood here. It was alive, had flesh and hair. It had its own smell. It could feel hunger and thirst and pain. It could enjoy the morning sun.’”

After working with Leaky for a time, Goodall journeyed to Nairobi, Kenya and got a job at a museum there. Her appointment there, however, was to be short-lived. Goodall soon began exploring the possibility of a trip to Tanganyika, where she would begin a study of wild chimpanzees along the shores of Lake Tanganyika.

The British authorities at first disliked the idea of a young woman living alone in a “wild” area of Africa, but eventually acquiesced when her mother, Vanne Goodall, agreed to accompany her there for the first few months.

Goodall and her mother arrived at the Gombe National Park in what is now Tanzania in the summer of 1960, where Goodall planned to carry out a field study to observe and learn about the natural behavior of chimpanzees. At first the animals, unused to a human presence, fled when she approached, and Goodall was forced to spend several hard months letting the chimpanzees get accustomed to her, while roaming the forest everyday in an effort to observe them in their natural setting.

Goodall’s observations along the shores of Lake Tanganyika led to several important anthropological discoveries which exposed remarkable similarities between chimps and humans. She found that Chimpanzees hunted, used tools, and displayed a far more complex social structure than they had ever been credited for. Anthropological research in Gombe National Park in Tanzania continues today, making it the longest field study of an animal species in their natural environment to date.

In 1977 Goodall founded the Jane Goodall Institute for Wildlife Research to further the study of chimpanzees in the wild, but the institute’s purpose has grown since then. As the website’s mission statement reads: “The Jane Goodall Institute advances the power of individuals to take informed and compassionate action to improve the environment of all living things.”

Goodall rarely spends time in Gombe anymore, and since 1986 hasn’t stayed in anyone place for longer than three weeks. She spends her time traveling, lecturing, and informing future generations of the dangers that nature faces and trying to educate others about her research and the importance of conservation. Goodall has also published two books entitled Wild Chimpanzees and In the Shadow of Man, which stand as a testament to the ongoing importance of her work as an adult, and the fulfillment of a childhood dream.