Construction on the new dormitory, here pictured between New Science Hall and Ormsby, may begin as early as this year, with completion planned for before the 2003-2004 school year.
Andy Dolan 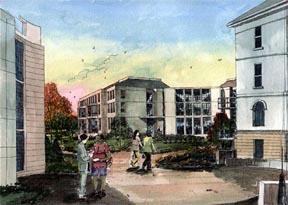 Construction on the new dormitory, here pictured between New Science Hall and Ormsby, may begin as early as this year, with completion planned for before the 2003-2004 school year.

The Board of Trustees voted last Friday to approve building of a new campus center on the quad-river site. They also approved the construction of a new dorm and further investigation into building more small group housing.The first issue the board addressed was the authorization of the design and construction of a 200-bed residential facility on the west end of campus. According to President Warch, the current plans of the building are only “pre-schematics” and will likely change before the final blueprint, but the groundbreaking could start as early as the end of the current academic year. The new dorm will be completed in time for the opening of the 2003-2004 academic year.

The board also chose the Quad-River site, as described in the Sasaki Report, as the location for the new Campus Center. The initial design and planning will begin soon, though construction will not begin for several years.

Finally, the board agreed to move ahead with further analysis of sites to be used for additional residential facilities, focusing on the smaller housing as recommended by the Sasaki Report. Currently, the eastern end of campus is the most likely location to be explored for this type of housing.

These decisions took place amid controversy from some campus members. The ongoing disagreements between the Lawrence Fraternity Alliance and the University were especially pertinent this past week. When asked about the Board’s approval of the quad-river site, the Alliance responded that they were “saddened, but not surprised” by the decision.

Commenting on the picketing that took place last week to protest some of the University’s actions, they stated that the informational picketing sessions held by the Alliance demonstrated that a “sizeable portion” of students are “strongly opposed” to the new formal group housing policy.

According to Harold Jordan, President of the Trustees, the actions of the Alliance did not affect the agenda of the board meeting. He stated that the board never had any plans to discuss the formal group housing policy at this meeting. The principles of the student group housing plan have been decided since 2000, and there was no possibility of changing the fundamental parts at this point. President Warch concurred that the major aspects of the plan would not change, but that the administration is open to negotiation regarding the particulars.

The Fraternity Alliance showed interest in further discussion, stating, “More than anything, we hope the university will now enter into meaningful negotiations with our chapters, our alumni, and our national fraternity offices to find common ground and craft a solution where everyone wins.”

On Thursday, some trustees held a meeting with the fraternity presidents. Dane Tice, president of Phi Kappa Tau, stated that he was “very pleased with the outcome” of the meeting and that his fraternity wished to continue discussion with the trustees.

Following the Trustee meeting on Friday, Jordan stated that it was “encouraging” to work with the fraternity leaders.

The discussions Thursday included a statement by the Phi Kappa Tau fraternity, in which they announced they were breaking off from the Fraternity Alliance. Tice explained that some differences in opinion meant that they no longer wished to be a part of the Alliance.

He stated that his fraternity was “quite uncomfortable” with some specific implementations, citing the picketing as an example. His house, he continued, “didn’t feel that [the picketing] was sending the right message, and more importantly, [the picketing was] not sending it in the right way.” He explained his house felt that a more direct approach of talking with the trustees would be “more beneficial and productive” as they would be able to explain specific concerns.

Tice also stated that his house felt that continuing in the Alliance could compromise the integrity of that group, which is another reason they decided to break away. Kit Vernon, representing the Alliance, said that they were surprised by the decision, but that the Phi Kappa Tau’s separation will have “no significant effect on the future of the Lawrence Fraternity Alliance.” He stated that approximately 90% of fraternity members at Lawrence are still members of the Alliance. The future action of the Alliance, according to Vernon, will include keeping in contact with alumni as well as the media.

The Phi Kappa Tau house intends to continue talks with the trustees as they feel the trustees are working on a plan that is best for all students. They feel the current approach will give back to the Lawrence community and is in the “interest of equity.”

Members of the Phi Kappa Tau house plan to discuss specific implementations of the plan with board members. A kitchen and an area large enough to support substantial groups were at the top of their list of needs for housing. They also plan to discuss details of the board transfer policy.

Tice made it clear that negotiations would be open to all student groups, not just the fraternities. He stated that they are working toward the betterment of all students on campus.