Lawrence receives “B+” on College Sustainability Report Card for 2011

The garden is on of many sustainability efforts on campus.
Amy Sandquist 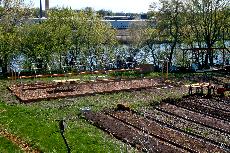 The garden is on of many sustainability efforts on campus. (Rachel Krivichi)

The Sustainable Endowments Institute released The College Sustainability Report Card 2011 Oct. 27. The report gave Lawrence an overall “B+” rating for its efforts to move towards sustainability and energy efficiency.
The Report Card, which evaluates 322 American and Canadian colleges and universities, shows a dramatic increase in sustainability trends on campuses such as commitment to carbon emissions reduction, campus farms or gardens, trayless dining and green building policy.
Lawrence has been making significant improvements since it was included in the Report Card in 2009, when it was given a “D” rating. In 2010, Lawrence received a “C” rating.
Sophomore Will Meadows is involved with several campus organizations that promote sustainability, such as the Environmental Responsibility Committee and Greenfire.
“We are improving on many fronts,” said Meadows. “We went up more than a grade. Our improvements are definitely in more student projects being installed and increased collaboration with administration.”
These ratings are based on the evaluation of more specific categories. For example, Lawrence received an “A” in the following categories: Climate Change & Energy, Food & Recycling, Green Building and Student Involvement.
Lawrence has shown significant improvement in the Green Building category, for which Lawrence received a “D” in the 2010 report. Because the Warch Campus Center received a LEED Gold Certification and all new construction and renovations met LEED Silver standards, Lawrence received an “A” in this category.
Another remarkable improvement was in the category of Climate Change & Energy, which Lawrence received a “C” for in the 2010 report. This was due to factors such as a 27 percent reduction in greenhouse gas emissions since 2003, the long break over December to conserve heating energy and the new solar panels.
Lawrence received a “B” rating in the Administration category, which is mostly based on the activities of the Greenroots Committee, which has been “developing student sustainability training and assessing the viability of renewable energy generation on campus,” according to the report. Lawrence also received a “B” rating in the category of Transportation and Investment Priorities.
The lowest rating Lawrence received was in the category of Endowment Transparency. A direct quote from the report states, “A list of all holdings is available to trustees and senior administrators. The university does not make the shareholder voting record of its mutual funds and commingled funds public.”
According to the press release about the Report Card, The Sustainable Endowments Institute, founded in 2005, “is a nonprofit organization engaged in research and education to advance sustainability in campus operations and endowment practices.”
The seven schools that received the cumulative rating of “A” are Brown, Dickinson, Oberlin, Pomona, University of Minnesota-Twin Cities, UW-Madison and Yale University. Out of the 322 schools rated, 52 schools achieved the title of “Overall College Sustainability Leaders.”
The Institute conducted research by looking at publicly available information, by sending surveys to school officials and student groups and by assessing each school’s performance according to the nine different categories.
Students like Meadows are committed to getting an “A” next year. “First, we have to maintain everything we’ve been doing well, and keep improving as we have been,” said Meadows.
Meadows continued, “We have to put our money where our mouth is, though, and search for more funding towards improving things like infrastructure. We have to increase our tie with academics, such as practicing engaged learning, which will become much more common, where students will be getting things done as they learn.”
“We can’t be fooled by anything that looks good; we have to observe what actually happens,” added Meadows. “We don’t just want to be known as those environmentalists on campus. We want people to realize that we’re all in this together. We want people to feel comfortable in enhancing and improving the ecosystems and the natural world.”
Students may find the full content of the report card, as well as the ratings of other schools, at www.greenreportcard.com.
Meadows encouraged students interested in contributing their efforts to the movement towards sustainability: “We are in the midst of such great improvements. You don’t have to be an environmental studies major to be involved in things like ERC or spending time at SLUG.