The Vikings will take the field next Saturday for Homecoming.
Justin Eckl 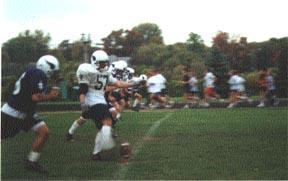 The Vikings will take the field next Saturday for Homecoming.

The Lawrence football team repeated last year’s woes against Beloit College with a 15-13 loss at the Banta Bowl last Saturday. The Vikings came into the game with a 1-3 record, posting their sole win against Macalester at the outset of the season. Despite a hitherto winless streak, LU had high hopes before the game. The team viewed the Beloit Buccaneers as a team they could have easily beat. That victory would have been necessary to bolster the Vikings’ winning spirit and turn their season around.

Lawrence’s passing game was solid with 218 total yards, but the ground game was not as successful. The Vikings posted only 98 yards, compared to the 225 by the Buccaneers.

In addition to winning the ground battle, Beloit held on to the ball a full 11:31 longer than the Vikings. Reflected in this was a 2 for 13 performance on third down and 1 for 3 on fourth down.

Scott Dummert led the defense with 15 tackles and one fumble recovery, but it was free safety Jacques Hacquebord who was the Vikings’ star. The sophomore from Waunakee, WI, registered 10 tackles and one fumble recovery. In addition, Hacquebord posted one interception, increasing his team-leading total to 11. As a kick-returner, he amassed 47 return yards on three attempts.

Lawrence opened the scoring, with 3:03 left in the first quarter, when sophomore quarterback R.J. Rosenthal threw an 8 yard bullet to sophomore wide receiver Zack Michael for a touchdown.

Much of the second quarter consisted of missed opportunities for both teams. The Viking defense stopped the Bucs five times. Beloit were able to stem four Lawrence drives. In addition, Lawrence failed to cushion their 7-0 halftime lead when kicker Jon Dykman’s 37 yard field goal attempt was blocked.

Beloit scored a touchdown on their first possession of the third quarter, taking the lead 8-7. They culminated their 67 yard drive with a 9 yard TD pass and a two-point conversion.

“A few mental errors killed us. We could have come out a little stronger on defense in the second half,” said freshman linebacker Jake Beschta, adding, “That’s when they got their score.”

Rosenthal had to be helped off the field after taking a hard hit in the second quarter. Freshman Drew Thomas filled in and played until the final minutes of the game, when Rosenthal returned. His performance was shaky, but Thomas somewhat redeemed himself in an erratic LU drive late in the third quarter.

Thomas passed to tight end McGinley for 26 yards to Beloit’s 44 yard line. One play later, Thomas was sacked for a loss of 12, but got up and launched a rocket to Michael for 24 yards. The drive ended when freshman running back Jon Miller fumbled and Beloit recovered.

With 6:29 left in the fourth quarter, Beloit scored again, after picking off Thomas.

Last year, when the Vikes played the Bucs in Beloit, Rosenthall threw a 9 yard touchdown pass to Michael with 33 seconds left in the game to cut the Beloit lead 27-26. The ensuing two-point conversion by the Vikings failed. Beloit hung on to win.

With less than four minutes left in this year’s game, Rosenthal’s first pass was intercepted, but was negated by a pass interference call on the Bucs.

Six plays later, Rosenthal threw a 16 yard bullet to Michael for a touchdown. The two-point conversion failed, and Beloit maintained possession to win the game 15-13.