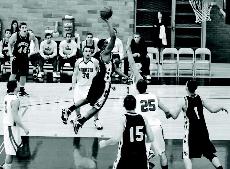 The men’s basketball team
had an up-and-down weekend at
Alexander Gymnasium, winning
one close game and losing another.
Last Saturday, the Vikings
faced off against Monmouth
College in what would prove to be
a tight game.
Point guard Jamie DeMatthew
was sidelined for the game with
an ankle injury, so Tyler Crisman
stepped in to start.
The first half was back-andforth,
with the two teams trading
narrow leads. The Vikings’ defense
kept them in the lead at halftime,
as the Fighting Scots were held
under 30 points in the first half.
Tyler Cullitan picked up a
total of nine rebounds, while Erik
Borresen led with a team-high 10
over the course of the game. Drew
Shaw also had a notably strong
defensive game, diving after
numerous loose balls and energizing
his team.
While it was not the best of
first halves for the Vikings, they
held a 32-29 lead at the break.
After halftime, both teams
picked up the tempo and Dekker
found his rhythm, scoring 20 of
his 28 points in the second half.
With 10 minutes remaining,
sophomore Crisman had an
emphatic layup, securing a onepoint
lead, and the Vikings did not
look back from there, stringing
together a 13-4 run.
A tired Monmouth team began
fouling, and Lawrence took full
advantage of the Scots’ fatigue,
hitting 19 of 26 free throws. The
final score was 73-62 in favor of
Lawrence.
The next afternoon, the Vikings
fell to Lake Forest in a tough overtime
loss.
The Vikings started slowly,
missing numerous scoring opportunities
and wilting under the
heavy defensive pressure from the
Foresters.
Dustin Lee was sent to the
bench after picking up two fouls
in the first 90 seconds, which
brought on Jon Mays. Mays put in
a strong effort off the bench, picking
up nine points in 26 minutes
of play.
Freshman Conor Klusendorf
came on and provided an immediate
jolt to the Vikings. After
Crisman snagged a defensive
rebound and Klusendorf broke
towards the offensive basket,
Crisman fed in a good pass to
the freshman forward. Klusendorf
took two dribbles, then finished
with a long layup.
On the next play, Klusendorf
stole the ball from the Foresters’
Chris Roets in front of the Lake
Forest bench. Klusendorf’s steal
would result in two points for
the Vikings after an Erik Borresen
layup found the net.
Yui Ueno was soon subbed in
for Crisman and in the next five
minutes, he went 3-3 from the
three-point line. Lawrence trailed
by one at the half, but the game’s
result was far from certain.
Lawrence came out of the lock-er room with more than enough energy to get them back into the lead. However, Travis Clark of Lake Forest would be a force to be reckoned with, scoring 23 points and grabbing 11 rebounds to cause the Vikings numerous problems in the paint.
Mays scored on a driving layup to give the Vikings a 55-53 lead with 41 seconds left.
However, the Foresters would tie it with eight seconds left. Just before time expired, Dekker missed a short, hotly contested jumper, sending the game into overtime.
The difference in overtime would be free throw shooting, with the Foresters’ careful effort at the charity stripe leaving them in the lead at the end of the game.
The Vikings, down by one point with almost three minutes remaining, missed a series of long shots, but a series of steals and offensive rebounds kept the Lawrence squad in the game. With just two seconds to go and his team still down by one, Mays committed an incidental foul, sending Lake Forest’s Travis Clark to the line for two shots.
Clark made both shots, securing a 60-57 overtime victory for Lake Forest (5-8, 3-3 MWC.)
Erik Borresen picked up a double-double with 14 points and 15 rebounds, while Dekker added 13 points. Mays and Ueno also contributed with nine points each.
After a game with Carroll University last Tuesday, Lawrence (6-6, 3-2 MWC) will travel to struggling Grinnell College (2-10, 1-5 MWC) for a game Friday night. 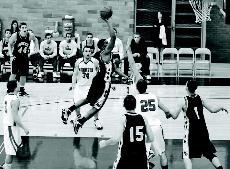