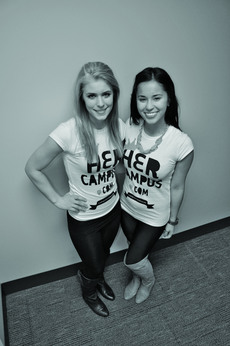 During Lawrence’s six-week winter break, Annie Kaiser ’11 oversaw the launch of the website Her Campus Lawrence, an online magazine designed for college-age women. The website features blog posts written by Lawrence students and is managed by Kaiser and Ariella Morik ’12.
Kaiser, an economics major and government minor, said that she stumbled upon Her Campus while “browsing a website that featured startup companies.”
She was immediately interested in the website and sought out more information. Three undergraduates at Harvard University founded Her Campus in September 2009. According to a press release detailing the launch of Her Campus Lawrence, Her Campus is designed to “[highlight] the best in student journalism while filling the critical hole in the media marketplace that responds directly to the needs of college women.”
Her Campus offers students from different colleges and universities the opportunity to begin their own websites unique to their particular schools.
After Kaiser discovered that she could create a Her Campus site specifically for Lawrence students, Kaiser applied. She explained the application process: “I had to submit my resume, three writing samples and then basically have a conversation with [Her Campus] about why I’d be qualified to start up the branch.”
“Upon starting the branch here at Lawrence,” Kaiser said, “I knew I had to have people to work with, so I reached out to people I knew who I thought might be interested.”
Morik, an English major and French minor, was the first person to express enthusiasm and joined Kaiser as co-manager of Her Campus Lawrence.
As a school contributing to Her Campus, Lawrence represents one of a small number of schools in the United States. Kaiser explained: “We were one of the original founding schools to join the website in a group of schools that includes Harvard, MIT, Northwestern. And we’re in that group now; we’re connected to them on Facebook and on Twitter. We’re networking out and showing that we are just as skilled; we have something to bring to the table.”
Morik agreed, noting the advantages of connecting with other students across the country: “I want to do as much as I can while I’m at Lawrence and not constrain myself within the ‘Lawrence Bubble.’ And that’s why I love the idea of Her Campus, because it puts Lawrence on this national level and puts us in conversation with east coast and west coast schools.”
Morik anticipates that it might take Lawrence students awhile to completely embrace Her Campus. “Perhaps people might not receive this very well initially, and it’s so different and could be construed as trivial, but that’s almost the point. We want to make it fun,” Morik said.
While the website is just in its beginning stages, Kaiser and Morik have a unified vision for their project. The next step for the website is gaining recognition as an official Lawrence club.
“We’re in the process of becoming a Lawrence club, so we can get funding and have a symbiotic relationship with the school. This is basically a student driven project… we want the website to reflect the conversation of the school,” Kaiser said.
After obtaining status as an official club, both Kaiser and Morik want to use the website as a means to connect Lawrence to the larger Appleton community.
“Once we get recognized by Lawrence, which is our first and foremost goal,” Morik explained, “I had this idea that potentially we could do community outreach.”
Morik continued, “We want to create relationships with not only Lawrence but also the community, which comes right back to Lawrence.”
Her Campus Lawrence gives Lawrence students a forum to discuss fashion, dorm life, relationships and careers in an informal and relaxed manner. The website is primarily being promoted through social media such as Facebook and Twitter.
Kaiser and Morik urge students interested in contributing to the site to find more information about getting involved by visiting it at http://hercampus.com/lawrence.

Amy Sandquist (Karl Hailperin) During Lawrence’s six-week winter break, Annie Kaiser ’11 oversaw the launch of the website Her Campus Lawrence, an online magazine designed for college-age women. The website features blog posts written by Lawrence students and is managed by Kaiser and Ariella Morik ’12.Kaiser, an economics major and government minor, said that she…