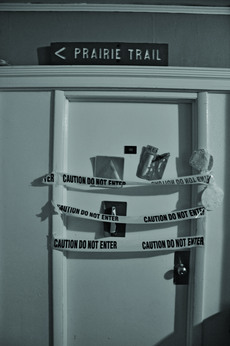 A bedroom floor caved during an unregistered party held in the Outdoor Recreation Club formal group house on Saturday, Jan. 8 when six support beams in the basement cracked and gave way. After the members of the house evacuated the room, they locked the door.
The ORC house, located at 742 East Boldt Way, was built in the last decade of the 19th century. It became student housing in the 1970s and has been inhabited by the ORC since 1998. The building capacity is only 11 beds; because of fire code restrictions, ORC typically hosts registered parties in spaces such as Sage basement and Trever basement.
According to ORC member and former house resident John Blinderman, “Right before it happened [the floor] dipped three times [.] everyone was jumping. Then it sunk and didn’t rebound.” At the time, students who were in the basement could see the floor of the room above them undulating.
The following morning, Katy Cummings, ORC house Residence Life Manager, contacted Assistant Dean of Students for Campus Life Curt Lauderdale. Lauderdale worked with security to assess the grounds. Security then called members of Facility Services.
“Facility Services staff was there to provide a temporary fix and long-term structural enhancements,” stated Lauderdale.
Junior Henry Strehlow, ORC member whose room suffered the damages, recounted, “[The carpenter] said it was a standard thing to fix in a very old house.”
Sunday afternoon, floor jacks were installed underneath the floor to raise the depression, and temporary posts were installed on Monday. Strehlow and his roommate, Robert Sweedler, were provided with singles in Sage Hall on Sunday, and were residing there as of Wednesday, Jan. 13.
Facility Services intends to install new steel cross-beams to replace the wooden ones in order to reinforce the floor of the bedroom before allowing the students to return.
Facility Services staff conveyed the extent of the structural damage to the residents of the ORC house and assured them that the building was structurally sound.
Though some of the beams that had broken had dry-rot, Cummings explained, “The house basement is built [such that] there are support beams that run throughout the entire floor, and [rooms] are separated by cement walls. Damage only traveled throughout one room.”
Concurrently, the heating stopped working around 3:30 a.m. Sunday. It has since been proven that the heating malfunctioning was caused by a student urinating on equipment outside of the house.
Strehlow stated, “[At the time,] there was confusion about that. I was surprised to find out that they were definitely unrelated.”
Cummings echoed this sentiment: “I just assumed that one of the beams had hit a heating pipe.”
Once the damage had been brought to the attention of Lauderdale, he affirmed, “Facility Services and Security were quick to respond. Temporary rooms were provided for those affected. Rooms were offered to everyone else in the house [.] mainly for the heating. By the time the temporary braces were installed, there was no structural concern.” The university provided space heaters on Sunday evening for those who remained in the house.
The heating in the house continued to have problems early in the week: Tuesday evening the heat in the first floor stopped working and Wednesday night the heat had turned off on the second floor.