Boulevard Theatre and Timothy Troy bring “The Woolgatherer” to Lawrence

Nathan Berish and Carrie Van Drest rehearse for &The Woolgatherer,& to be performed this Friday through Sunday in Cloak Theatre.
Rebecca Vande Hei 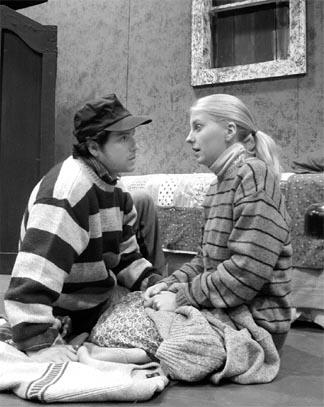 Nathan Berish and Carrie Van Drest rehearse for &The Woolgatherer,& to be performed this Friday through Sunday in Cloak Theatre. (Quinn Lake)

In need of some refreshing entertainment this weekend? Then head to Cloak Theatre and catch a performance of William Mastros Astrosimone’s “The Woolgatherer.” Astrimone is perhaps most famous for one of his earliest productions, “Extremities,” in which Fera Faucet’s lead performance granted her the status of a “legitimate actress.” (An impressive accomplishment, no doubt.) In “Extremities,” Faucet portrayed a character who had been the victim of sexual assault. Throughout the play, the tables are slowly turned until the role of victim and aggressor are completely switched. Lawrence University Drama Director Tim Troy points to the ever-present theme of crisis in Astrimone’s work, and enthusiastically goes on to describe the playwright as “clever” and “contemporary.”

In “The Woolgatherer,” which will be performed here this weekend, the plot generates a similar air of anticipation as in “Extremities.” The difference is that “The Woolgatherer” is significantly more light-hearted. A bittersweet comedy, this production opens with the meeting of two social misfits, and the story then develops parallel to their new friendship.

The set consists of a single room where the two get to know one another through rousing conversation about their hopes, their dreams, and everything in between. The outcome of this new connection is uncertain: will they find friendship? Will they find love? You’ll have to come and see to find out!

The Boulevard Theatre Production Company, located in Milwaukee, Wisconsin, has put together this production under Troy’s direction. Troy originally put on “The Woolgatherer” at the Boulevard Ensemble in Milwaukee sixteen months ago with players Nathan Berish and Carrie Van Drest. At that time the play ran for five weeks with sold out performances ongoing.

That success prompted Troy to reproduce it at Lawrence this fall, and the actors began work on the play again this past summer. This is the second year in a row that the drama department has remounted one of Troy’s professional productions at Lawrence. It is a treat to have this level of entertainment brought to us so soon into the school year.

Performances are at 7:30 p.m., Friday, Saturday, and Sunday evening. Everyone is excited to see the year kicked off with this theatric debut and, according to Troy, “it’s a show not to be missed!