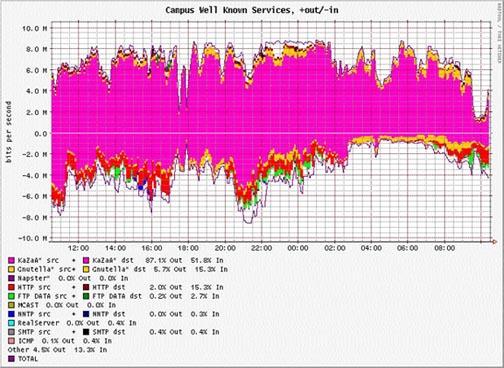 The graphic above illustrates the total bandwidth used by various online programs and services. The largest portion of the graph represents file-sharing programs.

Despite the well-publicized shut down of the online “peer-to-peer” file sharing service Napster, students across the country have managed to find alternatives for file sharing. The shutdown of Napster has caused many alternative networks to appear. A major difference with this new generation of peer-to-peer file sharing networks is that users can not only search for music, but also software. The continued popularity of such services has placed an unprecedented strain on campus networks across the country.

The three most popular third generation peer-to-peer networking services—Kazaam, Bear Share, and GNUtella—combined have consistently accounted for over 90 percent of the outbound internet traffic since the beginning of school.

Over the course of a typical 24 hour day, more than sixty gigabytes of files are transferred across the internet from Lawrence computers. That is an average of fifty megabytes per student, per day of outbound traffic. Because Lawrence pays for the Internet on a per unit of data transferred basis, the cost to the university is significant.

Although Lawrence’s internet connection is partially subsidized by the state of Wisconsin, that subsidy applies only to the fixed portion of the internet bill.

According to Head Network Administrator Robert Lowe, “We pay a small portion of the line charges, for example, the fixed portion similar to a telephone bill, but we pay all of the bandwidth usage and Wiscnet charges based upon periodic traffic measurements.”

Although the precise figures are unavailable to the Lawrentian, given a market bandwidth price of $1 per 500 megabytes of traffic, outbound file sharing services probably cost the university in the neighborhood of $4,000 a month during the school year. This figure is above the costs for providing the internet services used for legitimate purposes like the world wide web, ftp, email, and instant messenger.

Lowe argues that it would be appropriate to limit the outbound traffic used by file sharing services. This restriction would not detrimentally affect the quality of inbound internet service on campus.

“We have a wonderful resource, but it is being predominantly used by non-Lawrence community people,” says Lowe.

Because network usage typically follows a traffic pattern of 10 percent of users consuming 90 percent of bandwidth, computer services occasionally asks the individuals who most disproportionately use the common resources to reconfigure a portion of their file sharing system.

Computer Services is considering a broader campaign to educate students about the costs associated with this particular kind of internet usage. The crux of this campaign would be to educate users of Kazaam and Bearshare, as well as many popular GNUtella clients like Limewire.

In an era of shrinking budgets, Computer Services is faced with choosing between restricting internet usage or facing a further escalation of bandwidth expense.

Cameron Kramlich The graphic above illustrates the total bandwidth used by various online programs and services. The largest portion of the graph represents file-sharing programs. Despite the well-publicized shut down of the online “peer-to-peer” file sharing service Napster, students across the country have managed to find alternatives for file sharing. The shutdown of Napster has…