Members of the Delta Tau Delta Fraternity sat on their steps Thursday afternoon. The fraternity has been denied its formal group housing for next year.
Amy Siebels 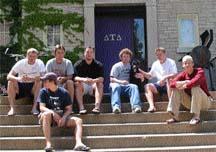 Members of the Delta Tau Delta Fraternity sat on their steps Thursday afternoon. The fraternity has been denied its formal group housing for next year.

The Phi Kappa Tau and Delta Tau Delta are the first Greek organizations to lose their residences under the new Formal Group Housing system.

The two fraternities, along with the Co-op, had to reapply for housing this spring after being awarded one-year contracts for the 2002-2003 school year.

Delt president Andrew Fieber said the feedback his fraternity received about the decision “led the house to believe the reasons for denial were based on past behavior, openness to the Lawrence community, and a lack of contribution to the campus.”

Fieber emphasized, “The feedback we have received is not an official record of the Formal Group Housing Board deliberation nor an official statement from the college.”

The fraternity, Fieber said, is appealing the decision. “Our appeal strategy,” he said, “is to make a compelling case that Delta Tau Delta is in fact an important and positive element to the quality of campus life, and deserves recognition as a formal group.”

He added, “Whether or not we receive the house, the chapter plans on operating as a significant contributor to the quality of Lawrence University campus life and remains committed to improving its image in the Lawrence community.”

Delta Tau Delta recently reached out to the community by hosting an ice cream social in conjunction with the VCSC, advertising community service opportunities.

Fieber said that while the chapter is “very disappointed about the decision to not let us participate in Formal Group Housing for the 2003-2004 school year,” they also “respect the idea of formal group housing being more widely available to student organizations.”

Fieber added, “I, along with the rest of the chapter, would like to express our appreciation for the support we have received from Dean of Students Nancy Truesdell and her staff, Amy Uecke, Karleen Dietrich, faculty advisor Doc Maravolo, alumnus advisor Greg Linnemanstons (’80), and Associate Director of Alumni Relations Andrea Powers (’94), in the efforts toward improving our image on the campus.”

As the Delts vacate 218 South Lawe Street, the Phi Taus will be moving out of the house next door.

Amy Uecke, Assistant Dean for Residence Life, explained, “Phi Kappa Tau was not eligible to apply for 206 South Lawe under Formal Group Housing policy, which states that during a group’s contract length it must maintain a 90 percent occupancy average.”

The group applied for and was awarded a smaller house.

Andy York, scholarship chair for Phi Tau, said, “We feel the decision, while painful for us, was reasonable because we didn’t meet the 90 percent occupancy requirement.”

York added, “We are disappointed to lose 206 South Lawe Street, but we are looking forward to starting anew at 741 East John and continuing the tradition and reputation that Phi Tau has always had.”

While the other three fraternities were among six groups up for review this year, they did not have to reapply for housing. Beta Theta Pi, Sigma Phi Epsilon, and Phi Delta Theta will retain their current residences.

Even though those three fraternities have been assured their housing for at least the next year, Beta president Kit Okimoto had a bad feeling about the future of Formal Group Housing.

“A very strong precedent has been set, and we will obviously be subject to this precedent in the near future,” said Okimoto. “I think that FGH is sound in principle,” he said, “but I believe that in its practice, students are not getting what they expected. I have heard from many that the details and technicalities can be very misleading, and I think this sentiment is one that has been growing, especially in the past couple weeks.”

Okimoto maintained that even the 90 percent occupancy requirement can be harmful to formal groups. “As it stands in FGH, there is no way to account for an off year, or even an off term,” he said. “Many group memberships fluctuate from year to year, and fraternities are no different. In my opinion, and perhaps I am alone in feeling this way, the ’90 percent’ threshold that exists pushes formal groups into a dark corner.”

Okimoto also expressed concern about the finality of the committee’s decisions. “FGH is not under LUCC’s jurisdiction, so there is no recommendation to be approved by the students,” he said. “Once the decision is handed down, it’s finished.”

The current Phi Tau and Delt residences on South Lawe Street will be available as theme houses and general housing for next year, respectivly.

Formal Group Housing does not preclude the possibility of the fraternities inhabiting their traditional houses in the future.

The university’s plans for expansion, however, are more ominous: the two quad residences on South Lawe now occupy the chosen site for the proposed Campus Center. While that project is still years in the future, the construction of the Campus Center will eventually require the houses to be torn down.