Guest’s new A Mighty Wind blows through the box office

Christopher Guest&s new &mockumentary,& A Mighty Wind, tells the story of a group of non-musical musicians who come together to perform after the death of a friend. The movie stars Catherine O&Hara, Harry Shearer, and Bob Balaban. It is in theaters now.
Carrie Cleaveland 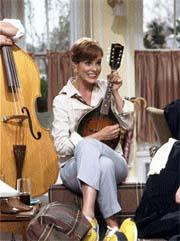 Christopher Guest&s new &mockumentary,& A Mighty Wind, tells the story of a group of non-musical musicians who come together to perform after the death of a friend. The movie stars Catherine O&Hara, Harry Shearer, and Bob Balaban. It is in theaters now. (rottentomatoes.com)

When a folk music icon dies, his son recruits the bands his father managed (The Folksmen, The Main Street Singers, and Mitch & Mickey) for a farewell concert. Hopelessly short of famous, the members of these folk groups cluelessly mock themselves for an hour and half. The humor is excellent and makes for a fun movie, despite some of its other shortcomings. The complications in bringing the folk musicians back together (despite break-ups, death, and nervous breakdowns) provide for much of the comedy in Christopher Guest’s latest mockumentary.

If you are not already a fan of Guest’s work, I would not suggest you start here. At one point, I looked over to find my cousin (who had hitherto never seen a film of his) asleep in the seat next to me.

And while I found A Mighty Wind on the whole amusing, it failed to achieve much more than that. The plot was slow and dragged in between the film’s funnier moments. This mockumentary lacks the caliber of Christopher Guest’s finer films, Waiting for Guffman and Best in Show.

While there are several characters who are enormously entertaining (Catherine O’Hara, Harry Shearer, and Bob Balaban), Guest incorporates characters whose quirks cease to be amusing within the first few minutes of their introduction. Eugene Levy, ordinarily a great comic talent, played a character so muddled and confused that he only succeeded in becoming confusing to watch.

Don’t get me wrong; it wasn’t a “bad” movie by any means. It failed, however, to create anything above and beyond the bar Guest already set for himself.

I went in expecting Guffman, and left feeling disappointed. The jokes are great, but this is not a knee-slapping comedy. If you’re looking for big laughs, I’d look elsewhere.

A Mighty Wind is one of those movies you need to be in a particular mood to enjoy. It’s good for a chuckle at the cheap seats, but not much else. C+