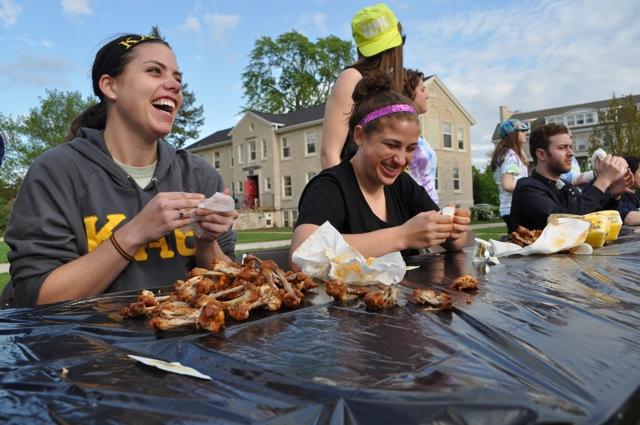 Lawrence’s seven Greek sororities and fraternities hosted events to raise money for their respective philanthropies throughout Greek Week from Sunday, May 6 to Saturday, May 12. These events, coordinated by Panhellenic Council and Interfraternity Council, aimed to foster camaraderie between Greek organizations and raise awareness about Greek life across campus.

Lip Sync, traditionally one of the most well-attended events in Greek Week, was held Monday in the outdoor Wriston Amphitheatre for the first time in the history of Greek Week. Three sororities and one fraternity performed for an audience comprised of both Greeks and non-Greeks. The winner, Delta Gamma, took the stage first and danced to several songs that represented female empowerment. The women of Kappa Alpha Theta and Kappa Kappa Gamma tied for second place with a mash-up of David Guetta songs, and Backstreet Boys and N’Sync, respectively. The Beta Theta Pi Fraternity took third place with a martial arts inspired dance.

In the days before Lip Sync, Delta Tau Delta hosted “Grillin’ and Quadball” on the Quad and Sigma Phi Epsilon Fraternity hosted its annual “Ballin’ on Boldt” basketball tournament to raise money for its philanthropy, YouthAids. YouthAids, a non-profit organization in South Africa, combines entertainment and education to inform young people about HIV/AIDS prevention.

On Tuesday, Kappa Kappa Gamma hosted their annual wing-eating competition, “Too Hot to Handle”. Proceeds from the event went to their philanthropic organization, Harbor House, a local women’s shelter.

The teams for “Too Hot to Handle” included all Greek organizations, except for Sigma Phi Epsilon. Senior Eric Follett, of Delta Tau Delta, won the individual round while the members of Phi Tau won the relay race.

Sophomore Gabriela Guilfoil competed in the wing-eating contest and said, “I think it’s a lot of fun, as someone who’s not affiliated, but has a lot of friends in the Greek system. It’s nice to see a sense of unity on campus.” However, she also added, “It can feel a bit ostracizing when you’re not a part of [Greek life] but I think the best thing to do about that is throw it by the wayside.”

The women of Delta Gamma held their annual event, “Anchor Splash” on Wednesday in the Buchanan-Kiewit Wellness Center pool. In this event, both Greek and non-Greek teams completed swimming relays, biggest splash competitions and synchronized-swimming routines. The money raised from this event benefitted Service for Sight, Delta Gamma’s national philanthropic organization that provides support to visually-impaired children and adults.

Kappa Alpha Theta’s “Kicks 4 Casa” took place in the Quad. Along with the kickball tournament, the event held lawn games, face-painting and a bake sale that featured their signature cupcakes. Finally, Beta Theta Pi pitted teams against each other in a dodgeball tournament in the Buchanan-Kiewett Center.

These events will culminate on Friday night with All-Greek Formal where Greek members and their guests will celebrate the success of the week at Fox Valley Banquets. Phi Kappa Tau will sell pies to the public to throw at fraternity members as part of Ormsby Zoo Days on Saturday morning.