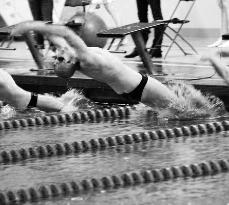 Peter Brengel: SwimmingIf you could swim anywhere in the world, where would it be and why?
I always enjoy swimming outdoors, so if I could pick one place to swim year round it would most likely be San Diego. There are a number of incredible swimmers that come from southern California and I think training outdoors makes all the difference.

How are you preparing for the conference meet and what are you doing to improve off of your accomplishments from last year?
Well, this year’s freshmen class really changed the dynamics of the team as a whole; bringing greater focus and intensity during training. I feel like everyone on the team has really stepped up to put forth extra effort during sets. This team mentality has enhanced my drive to be faster in the water, and with this drive I hope to repeat my accomplishments from last season.

Would you rather swim a relay or an individual event?
Relays bring a new dynamic to racing because you know the effort you put into your swim has a direct effect on the three other swimmers in the relay. However, that is not to discount individual events. The adrenaline you get when you go up against a rival allows you to do some pretty awesome stuff. So to answer your question, I would say both are great in their own respects.

What is the best part about swimming? How about the worst?
As an experienced swimmer, the best part about swimming is the last two weeks of training leading up to conference and potentially nationals. Not only is the end of the season close, but knowing that all of your hard work put in throughout the year will result your best times is a great feeling. The worst part, to be honest, is the six to eight months of intense training, leading up to just three days. If you’re sick or just a little off for those three days, then . that’s swimming.

If there was one NCAA rule about swimming that you could change, what would it be and why?
Definitely the suit ban would be the rule I would change. I understand that the idea of a $300-500 suit that only lasts maybe 15 swims is crazy, but if there is something out there that gives me the completive advantage, allowing me to swim that much faster, then I’m willing to pay for it. However, I also understand that [the price of] a $300-500 suit limits others from using them.

How old were you when you started playing hockey? What got you started and what’s kept you in the game?
I didn’t start playing hockey till I was seven, which is considered pretty late in the hockey world. I taught myself how to skate by rollerblading in the driveway every chance I got. Sure this is a bit biased but the fact that hockey is the best game in the world is the reason why I have continued to play it for the past 16 years of my life. 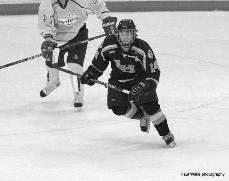